Reigned: Official reigned from 1479 to 1425BC; actually reigned 1457 to 1425BC due to Pharaoh Hatshepsut’s claimed sole reign rather than regency
Name meaning: Menkheperre Tuthmose: “Eternal are the manifestations of Ra, Born of Thoth” 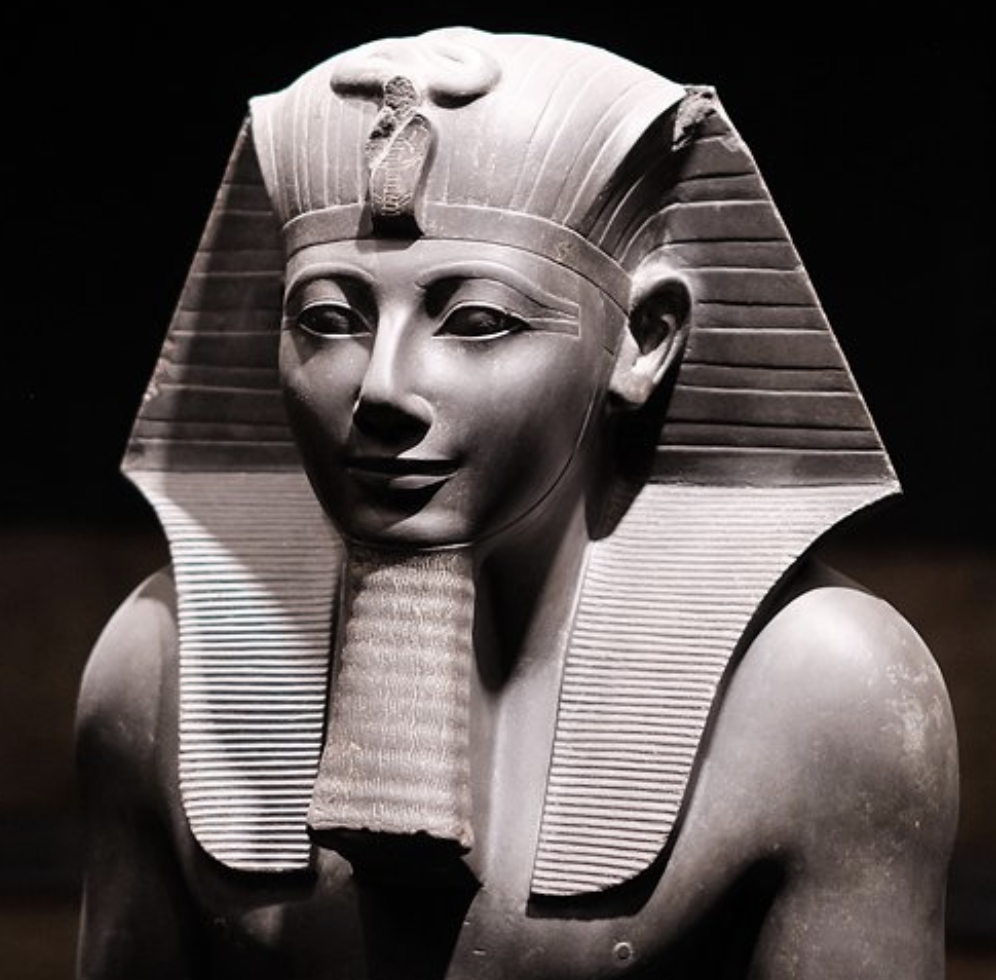 Son of Pharaoh Tuthmose II and his wife, Iset, he was born in 1481BC and immediately became the Crown Prince. His father, the Pharaoh, died when Tuthmose was 2 years old and as such was in no way capable to claiming the Throne for his own.

As such the now infamous Hatshepsut, hereditary Princess, full blood Queen, Great Royal Wife and full sister to Pharaoh Tuthmose II had been drawn in by his father to co-rule as Regent with the baby Pharaoh as she was also his stepmother. Although Hatshepsut she decided to take this a step further and reign herself as a female Pharaoh. To discover more about Hatshepsut’s life as a Queen, a Regent and then a Pharaoh, click here.

He further married Nebtu and together they had Princess Nefertiri. Lastly, when he was Pharaoh, he made politically aligned marriages to Princess Merti, Princess Menwi and Princess Menhet. 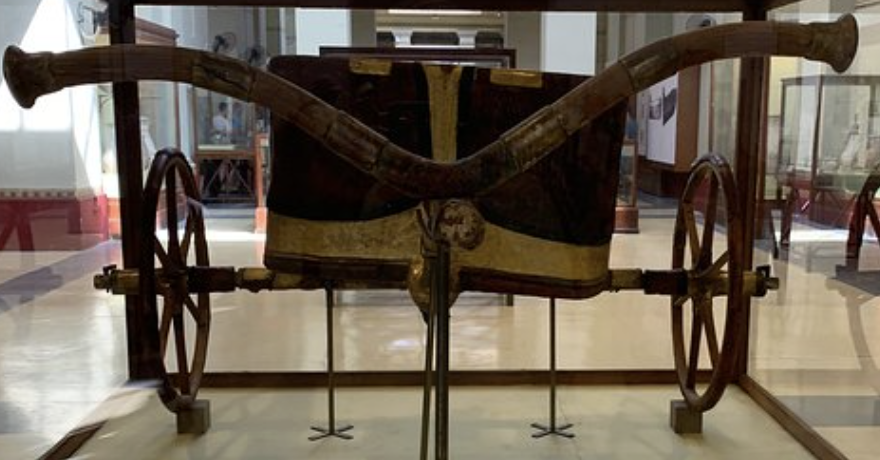 Crown Prince Tuthmose was fully educated as a royal Crown Prince and was fully prepared to take on the Throne as a cultured and educated Pharaoh. It has been reported that he held human life to have a high value, prized Art and Music, and respected other cultures and religions. In saying this, his Military Training was also a high priority, with the use of Weapons, Battle Tactics and the Art of War being on the education list.

Egyptologists believe that the Crown Prince would have lived among the soldiers he trained with fairly early on in his life. Obviously for practical and comrade reasons, but also to remain, ‘out of sight and out of mind’, from his stepmother, Pharaoh Hatshepsut. Although, and in saying that, when Crown Prince Tuthmose was old enough and trained enough, Pharaoh Hatshepsut put him in control of the Armies of Egypt. Is that something a Pharaoh would do if they didn’t trust the General that they had appointed?

If nothing else, Pharaoh Tuthmose III should be remembered today for the expansion of the Empire of Egypt throughout the 17 Military Campaigns that Pharaoh undertook during his reign. In doing so he created an Empire for Egypt that at the very least covered all the lands between Nubia, to the South of Egypt, and the Asiatic Regions of modern-day southern Syria in the North.

He campaigned in countries which include the Hittites in modern-day northern Syria and Nubia; crossed the Euphrates and fought against the Mitanni of modern-day southern
Syria. How do we know this? Egyptologists have found all the details of his Military Campaigns etched into the Walls inside the Precinct of Amun at Karnak Temple, and these were corroborated by his Royal Scribe and Army Commander, Thanuny.

Thanuny provides the insight into Pharaoh Tuthmose III as a Commander who well knew his own, and the abilities of his Troops, and was totally confident of his Victory in his Campaigns.

After Pharaoh’s first Military Campaign he began a strategy which would continue throughout his rule. This was: 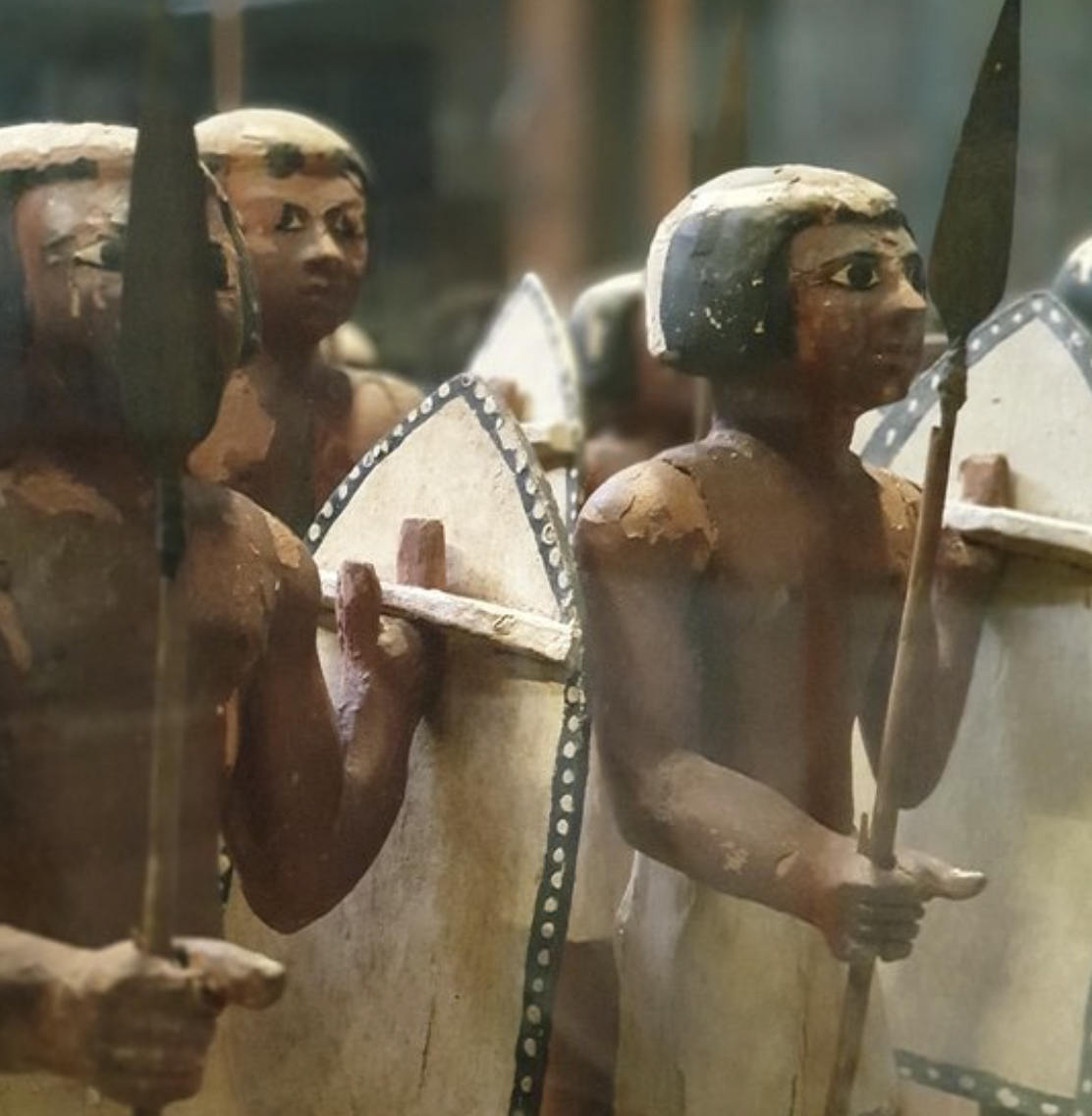 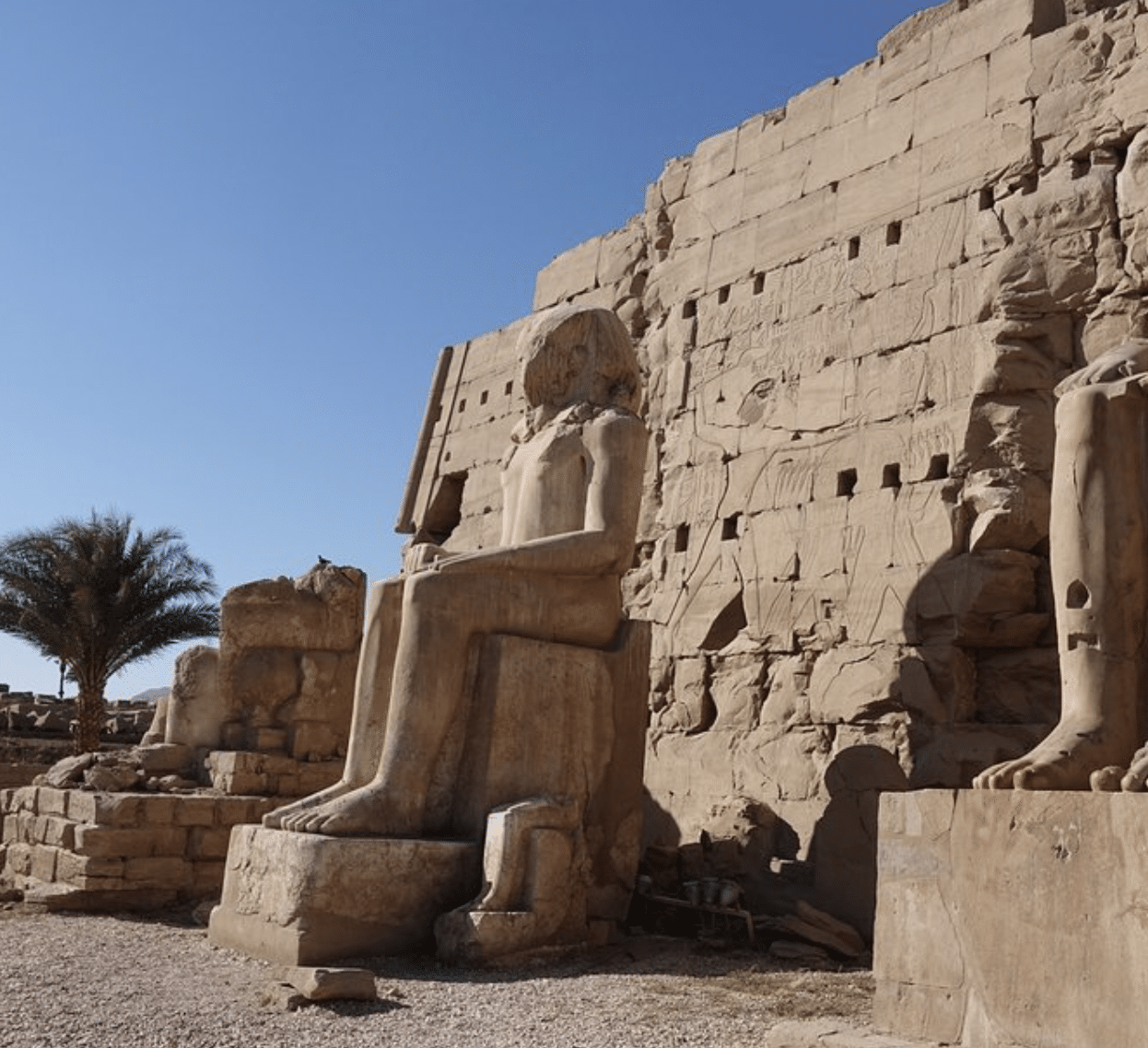 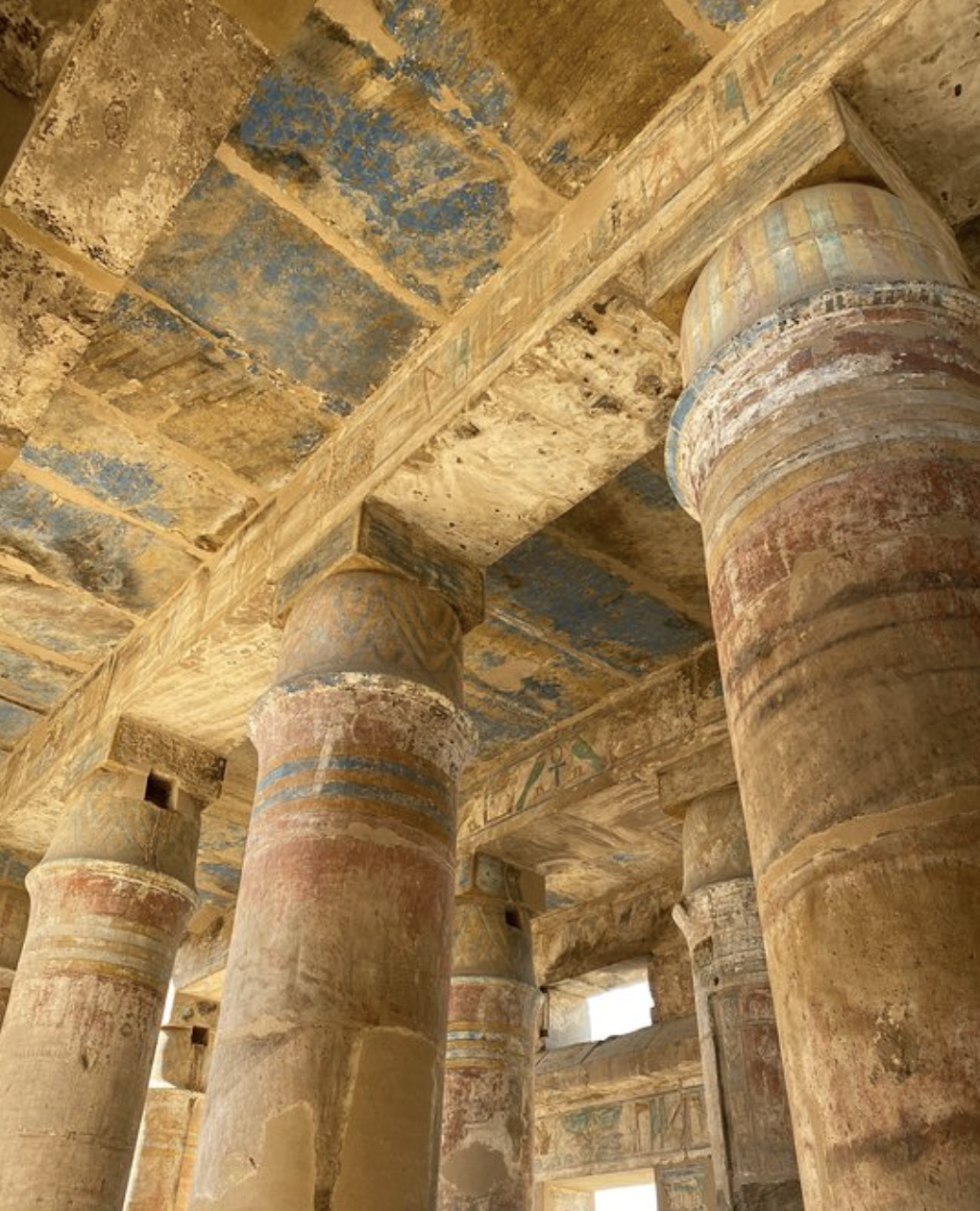 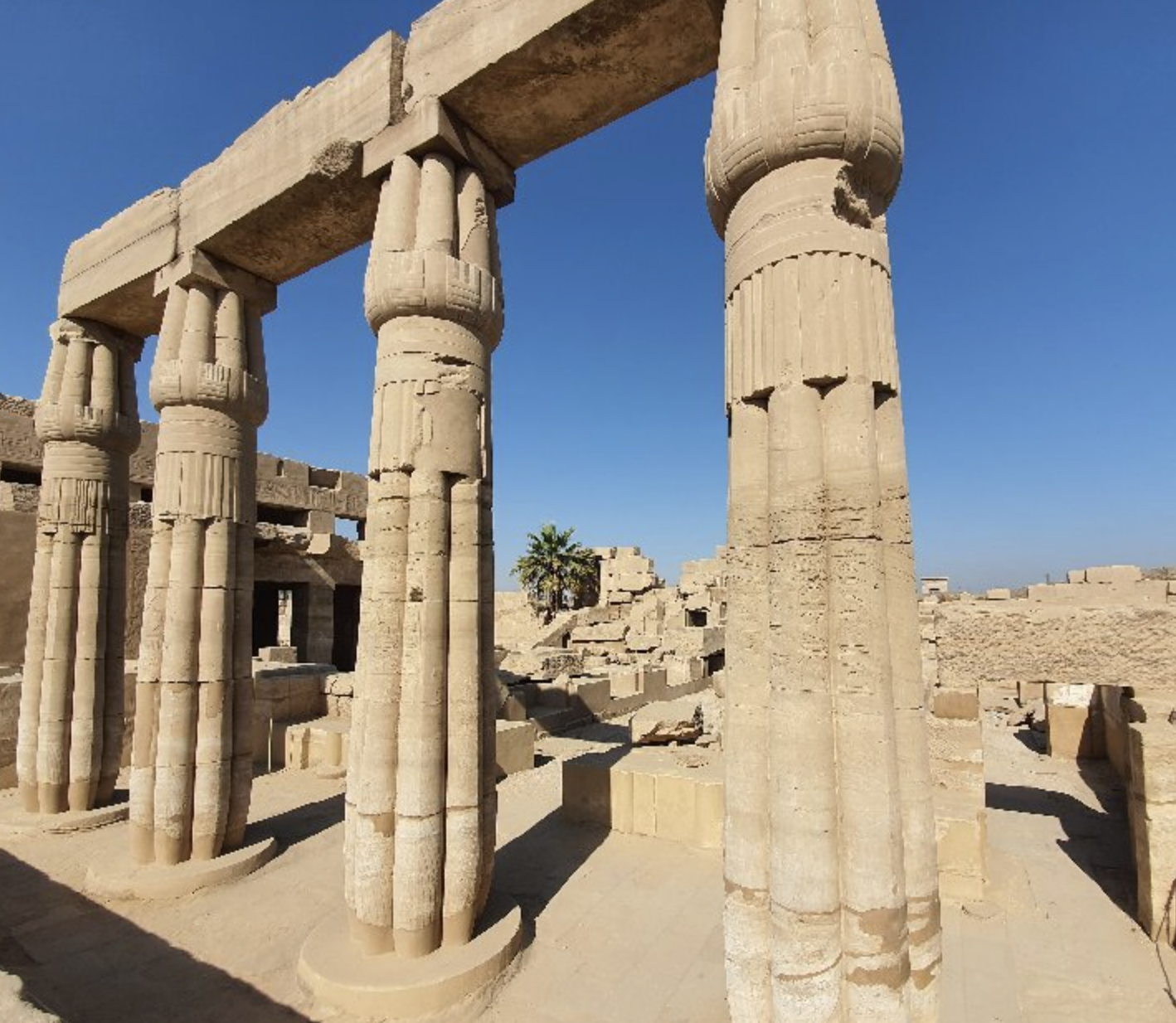 Egyptologists consider Pharaoh Tuthmose III’s Architects and Artisans as quite revolutionary. They kept “in style” with previous Pharaoh but changed more subtle things, such as building Egypt’s only known heraldic Pillars; painting his Tomb throughout rather than using any sort of Reliefs; and using the newly learned skills of Glass making for use in the Palace for drinking glasses.

Pharaoh recorded that he erected over 50 new Temples, some of which have been lost, but one of these included the Sun God Temple at Heliopolis which was graced with a pair of Obelisks. These Obelisks are now known as “Cleopatra’s Needles”; one is in Central Park, New York, USA and the other is on the Thames Embankment in London, UK. His biggest concentration for his building campaign was at Karnak Temple in Thebes, which included:

Regnal Year 1
Egypt’s enemies formed a coalition between Kadesh and Megiddo and mobilised their joint armies; whilst the Tribesmen and their relatives in Mesopotamia took immediate advantage of Egypt’s change in ruler and refused to pay their annual tribute and announced themselves to be unbeholden to Egypt any longer.
The Hittite’s began their advancement out of their territories and on to Megiddo, near Mount Carmel, to join their partners. The new Pharaoh promptly prepared and took out Egypt’s armies and marched hastily to meet them.
There ensued the Battle of Megiddo; acting impetuously Pharaoh marched on the most dangerous route through the mountains: disassembling, carrying and reassembling all their equipment; to confront his enemy, which turned out to be strategically brilliant. He routed them and eventually also took the City after roughly a 7-month long siege.
He collected the spoils of war, tribute, sons of the captured Nobles and the crops of the defeated enemy and brought the bounty back to Egypt. This quickly changed the balance of power in the Near East and soon the different Princes of Syria were all beholden to sending sons as hostages and tributes to Pharaoh Tuthmose III.

Regnal Years 2 to 7
Although these were called Military Campaigns, Historians have concluded that these appear to have been Military Expeditions to collect Tribute from Syria and Canaan.
During this period, it is though that Pharaoh also turned his attentions to his Southern border with Nubia. It is known that he strengthened his border down to Napata and Kurgus where he built his Temple of Amun near to Mount Barkal. He then employed many of the Tribes inside his Gold Mines which he established, keeping them under his rule and without use of their national resources they did not have the means to revel.

Regnal Year 8
The 5th Campaign captured Cities inside Southern Syria including a city on the coast which he garrisoned to ensure supply lines via the Sea between Egypt’ North Coast. 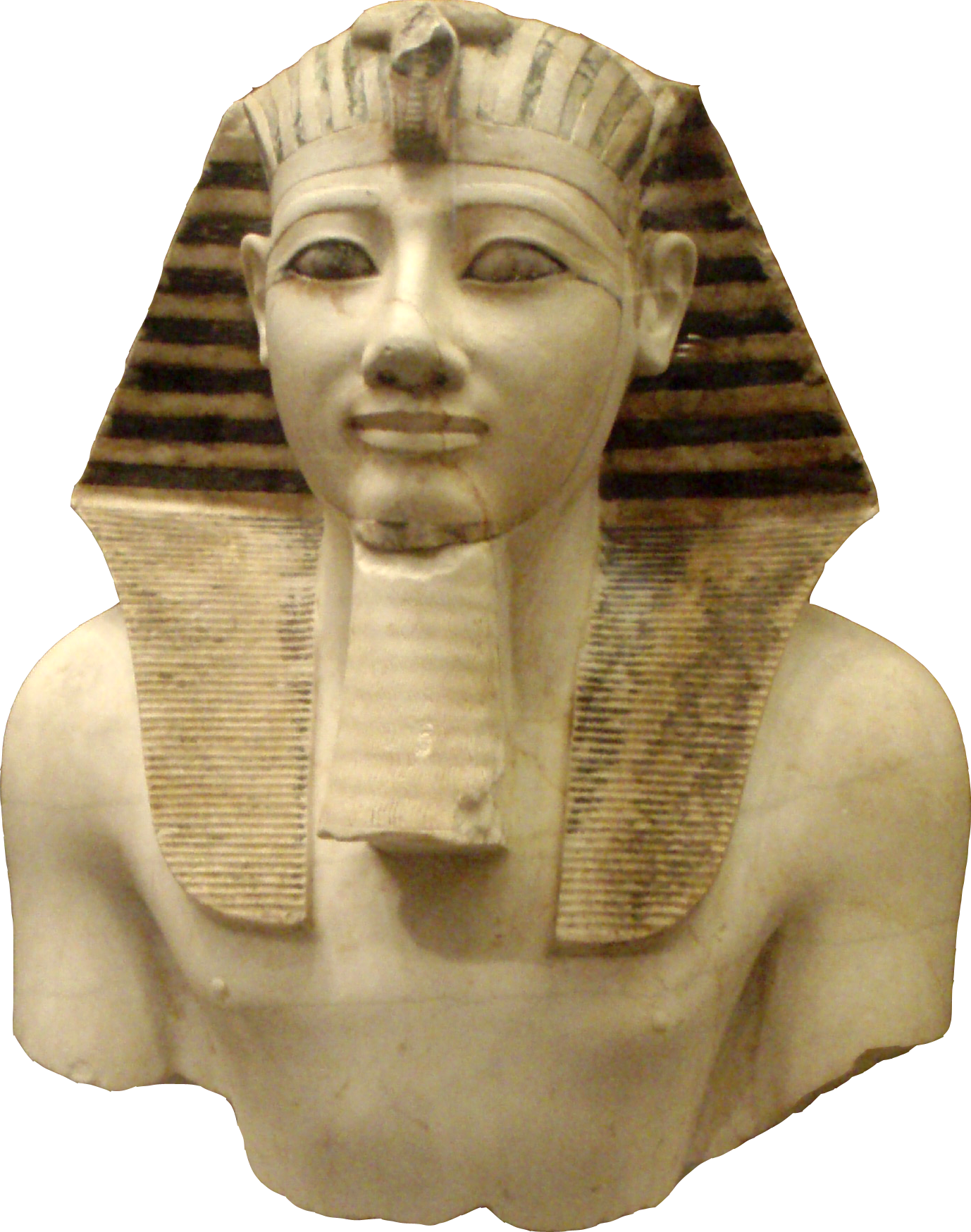 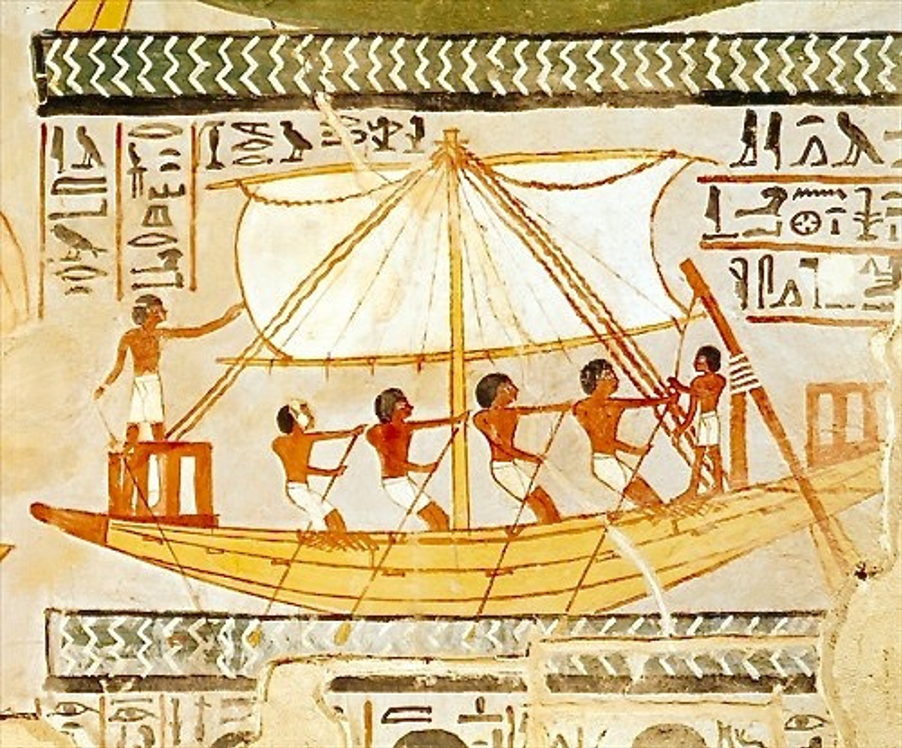 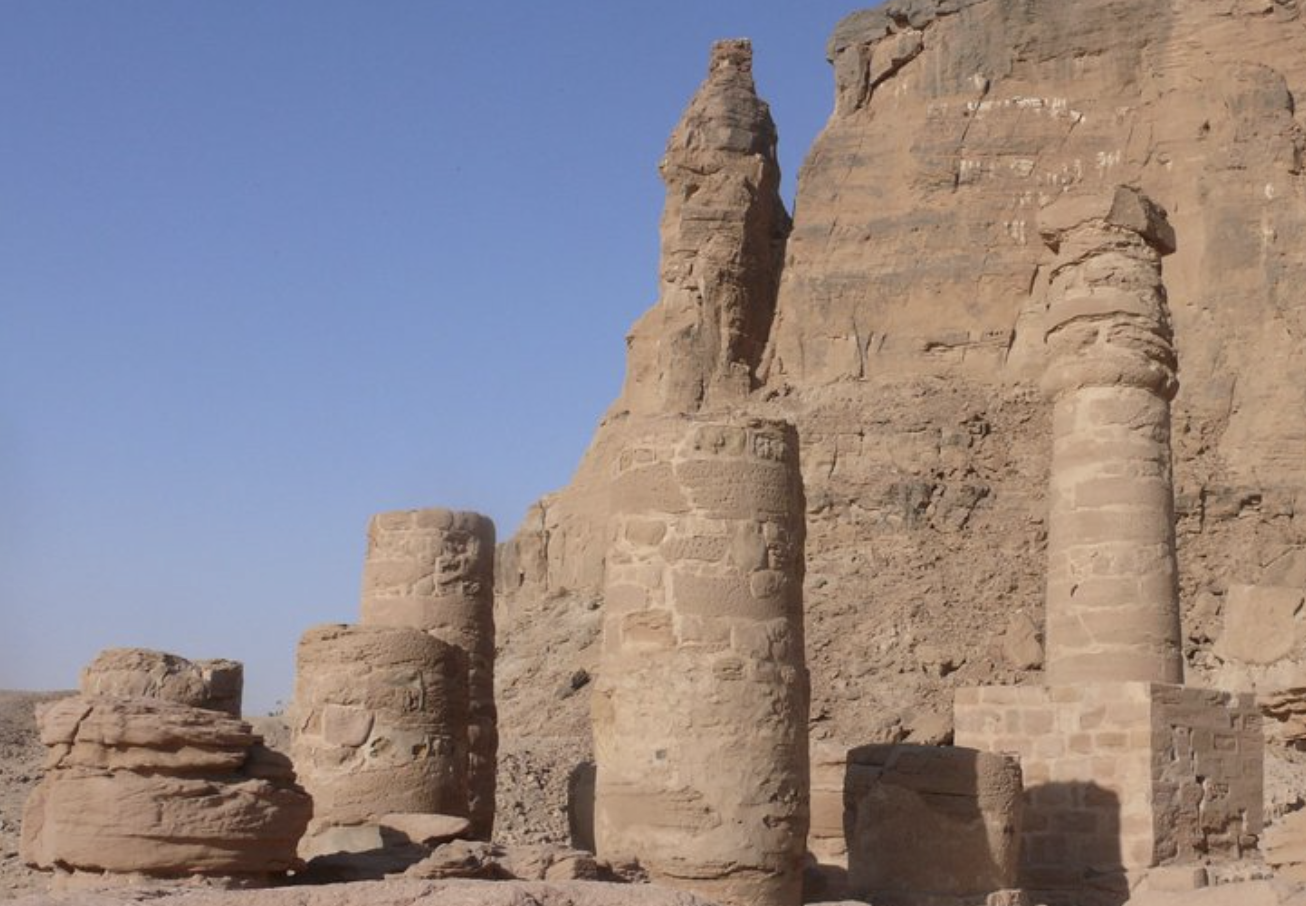 Regnal Year 9
Began with a transportation of troops, supplies and military weapons via sea to Byblos; the 6th Campaign. The Troops, led by Pharaoh, moved North and sacked Hittites lands around Kadesh before capturing Simyra and quelling a rebellion in Ardata.

Regnal Year 11
Syria rebelled against the hold that Pharaoh Tuthmose III held over them. Pharaoh undertook his 7th Military Campaign which was again supported via the Sea. He firstly captured Port Cities where the grain for the Syria states were collected. Pharaoh kept the grain for 2 reasons:

Regnal Year 13
Pharaoh planned and undertook his most venturesome move. He attacked the Kingdom of Mitanni which involved the whole Egyptian Army crossing the Euphrates River via pontoon boats which Pharaoh had transported from Egypt via the Sea, and into Byblos, and then on Ox Carts overland through Syria.
But how did he do this without arousing the suspicion of the Mitanni King? Pharaoh pretended he was just in Syria to collect his normal tribute. In doing this he managed to surprise the King, capture hundreds of their soldiers and approx. 30 members of the Royal harem. The Mitanni tried to raise a Militia, but this was poorly organised and failed against the might of the Egyptian Army.
To commemorate his Victory, Pharaoh erected a Stelae next to the one of his Grandfather next to the Euphrates River.
On the return journey, Pharaoh made the most of his extended trip abroad by collecting the tribute he was due in Syria and managed to add in some Hunting of elephants in the Orontes Valley.

Regnal Year 15
Military Campaign 9 in Syria with minor nomadic tribes and little tribute gathered due to the non-plundering of the richer cities in the areas.

Regnal Year 16
Pharaoh met the Mitanni at Aleppo where Pharaoh claims to have won a decisive victory, but Historians are doubtful about this claim due to the small amount of tribute Pharaoh records having gained and he only captured 10 soldiers.

Later Military Campaigns to the North
These concentrated on tribute collection and keeping these vassal states in order and working hand in hand with the Egyptian Government. Pharaoh received tribute from the Hittites, Crete, Assyria, Babylonia and Cyprus.

Regnal Year 30
Pharaoh appointed his son, Crown Prince Amenhotep, as co-ruler so he could hand over the Throne in a much calmer and more fluid way than the way in which Pharaoh Tuthmose III had inherited the Throne from his father.

Regnal Year 31
Pharaoh campaigned into Nubia on his last Military Campaign. He travelled up the Nile, to the furthest point an Egyptian Pharaoh had ever been, the fourth Cataract. 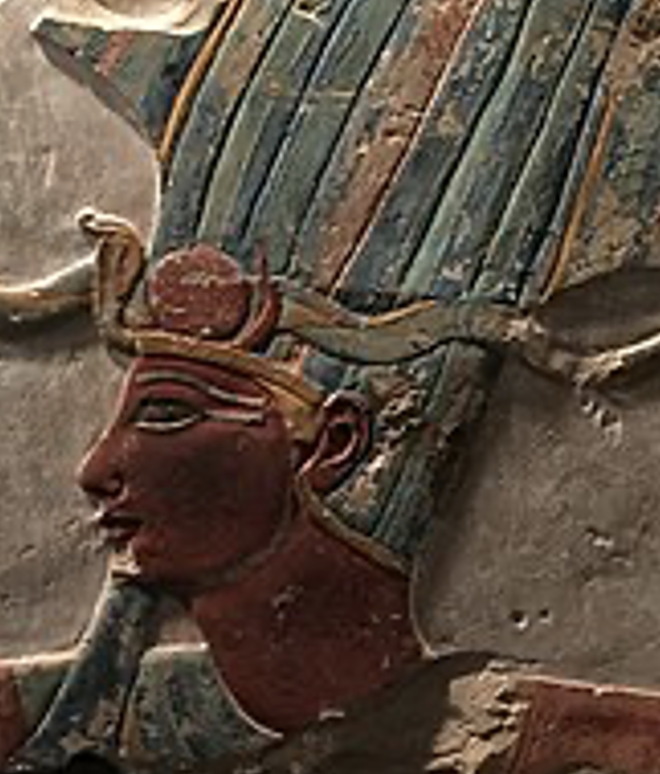 In the last few years of Pharaoh’s reign, he removed many of his predecessors highly visible and known buildings, cartouches, statues and obelisks. This included removing Pharaoh Hatshepsut from the King’s List. Despite former theories that Pharaoh undertook this in a fit of pique, this is highly unlikely and now Egyptologists believe that it was much more to do with the smooth transition of power from himself to the Crown Prince, his son and heir and had little to nothing to do with Pharaoh Hatshepsut herself. 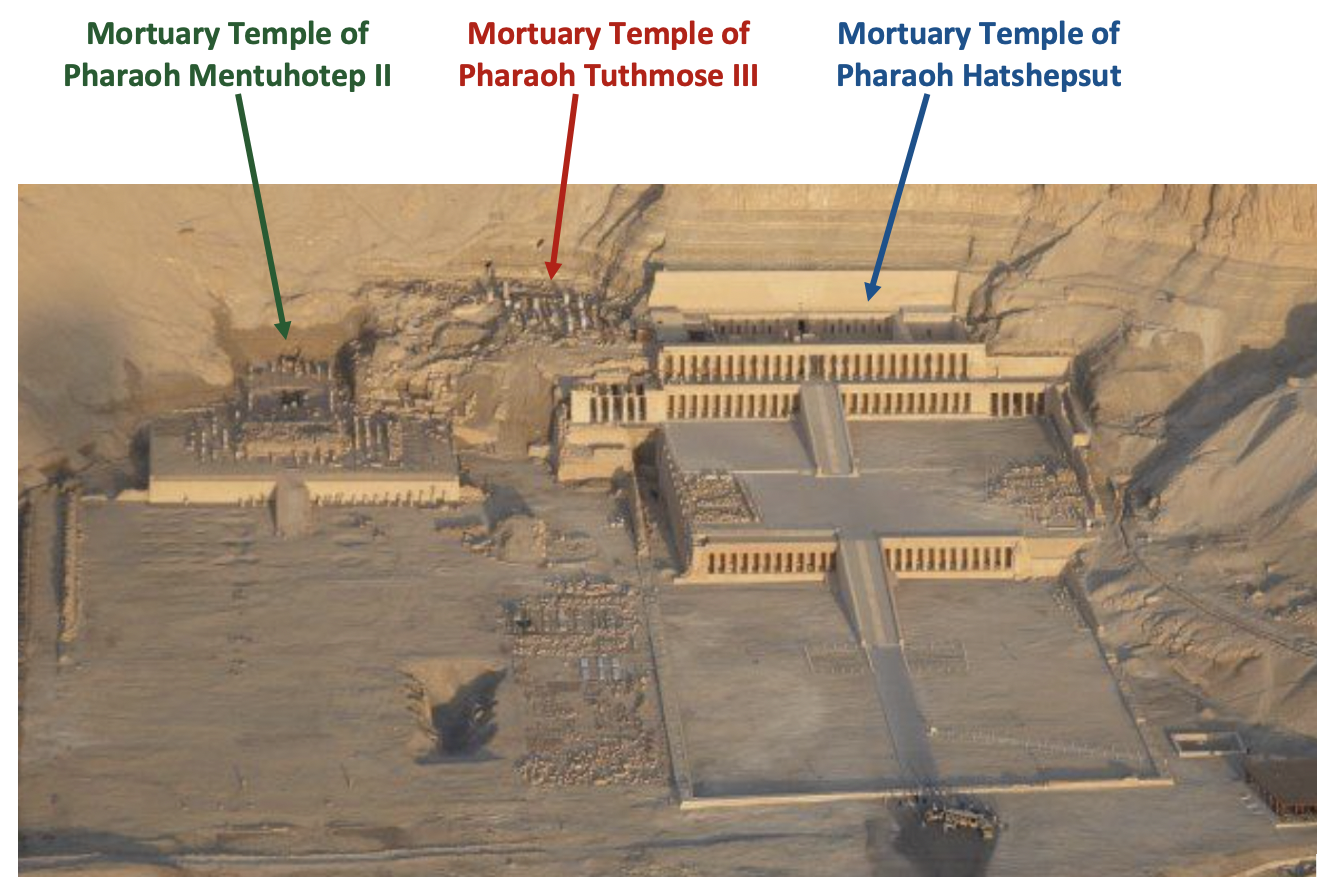 Pharaoh Tuthmose III commissioned his Mortuary Temple, and building commenced in Regnal Year 24, during the last 10 years of Pharaoh’s reign by Vizier Rekhmire. The Temple was built from Sandstone and Limestone and sat on a rocky platform that extended from the cliffs. Importantly it was above the earlier 2 Mortuary Temples on site and therefore was seen to dominate over them.

The Temple was dedicated to the God Amun and resembled the Mortuary Temple of Pharaoh Hatshepsut with ramped terraces leading to the higher Chapels. Unfortunately, Pharaoh never got to use the Temple for the reason he constructed it as it was probably not finished before Pharaoh died, leaving his son to take his place as Pharaoh Amenhotep II, who is the likely candidate who completed the building work on his late father’s behalf.

Use
It is thought that the Temple usurped the role that Pharaoh Hatshepsut’s Temple played in the Festival of, “Beautiful Festival of the Valley”, when the Sacred Barques of the Theban Triad left Karnak Temple on the East Bank of the Nile and visited the Mortuary Temples of the Pharaoh’s in the Theban Necropolis on the West Bank of the Nile. Pharaoh Tuthmose III’s Mortuary Temple would have been used as the nightly resting place of the Barques of the Deities during this Festival.

When Pharaoh Tuthmose III died, he was buried in KV34 in the Valley of the Kings.

Pharaoh’s Mummy was not found in his Tomb but in the Mummy Cache at Deir el Bahri.

It appears the Priests of Amun realised that his Tomb had been pillaged not long after his burial and were worried for his body, so they arranged for it to be moved and eventually it was re-homed with many other Royal Mummies in the Mummy Cache. To learn more about this Cache, click here. 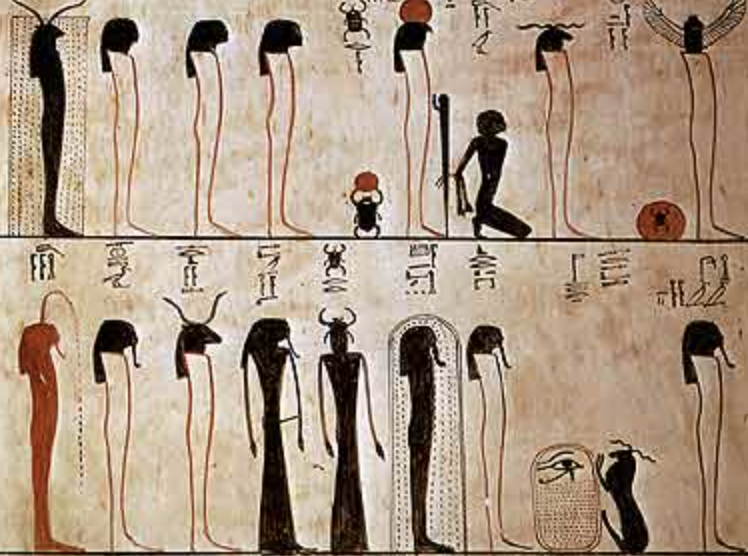 Click on the Image to Visit Pharaoh Tuthmose III’s Tomb 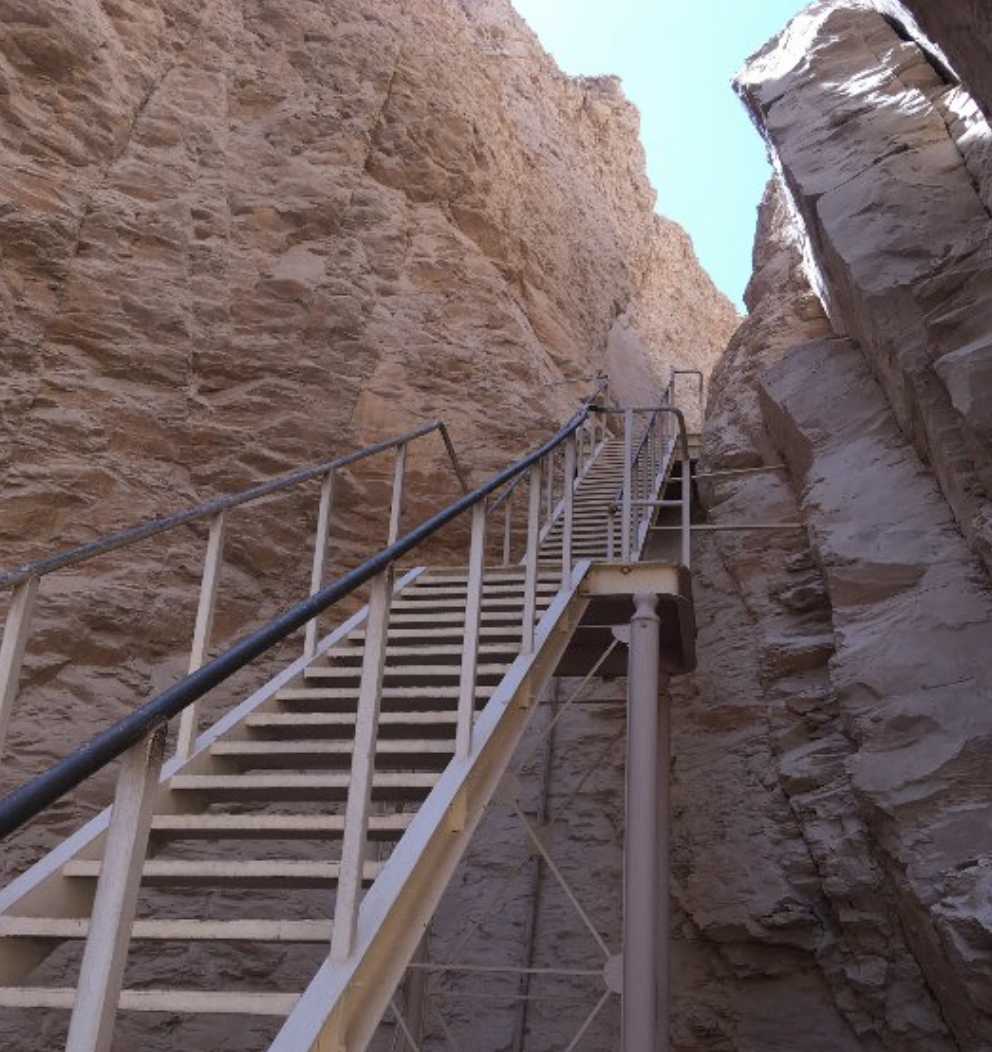