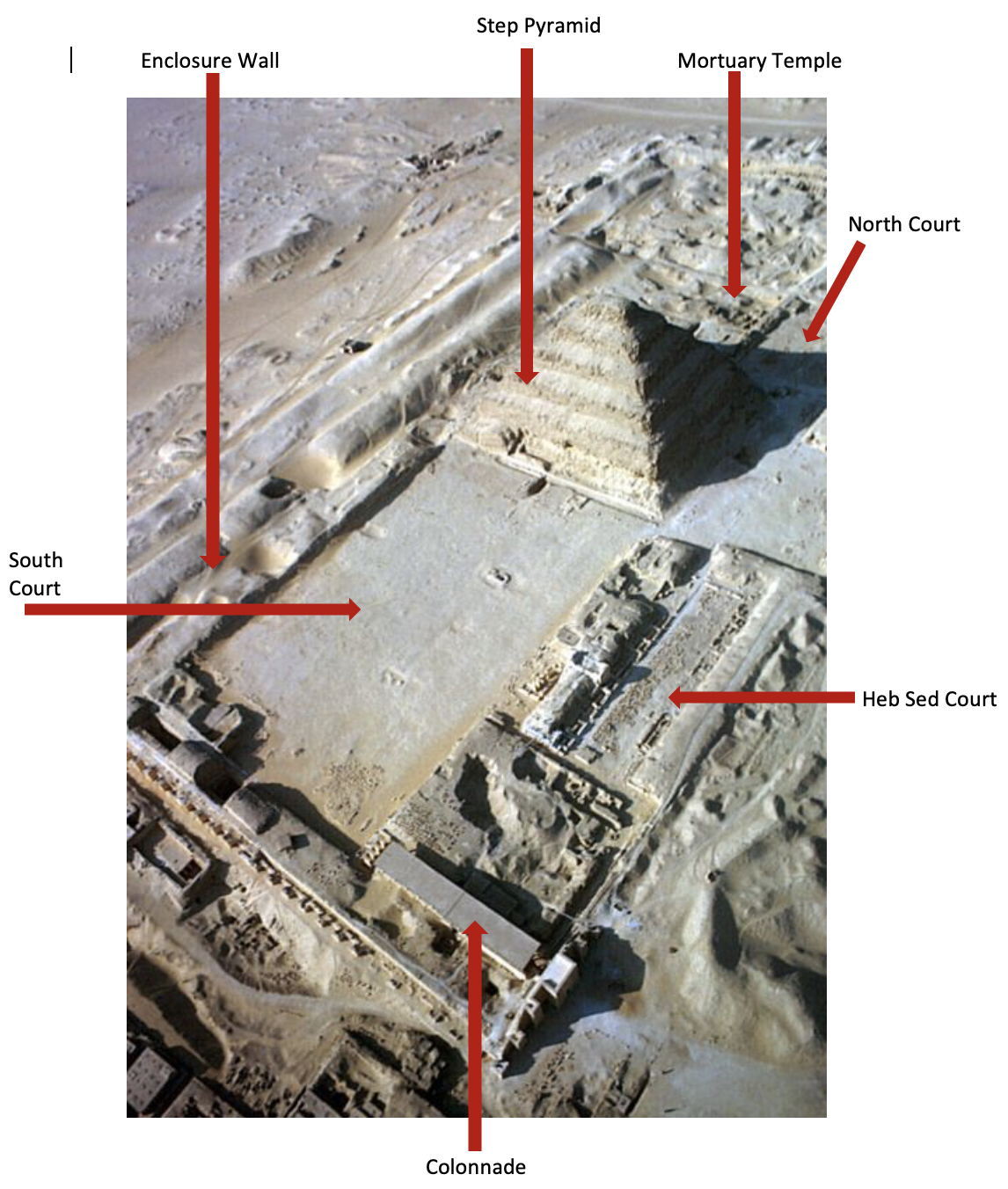 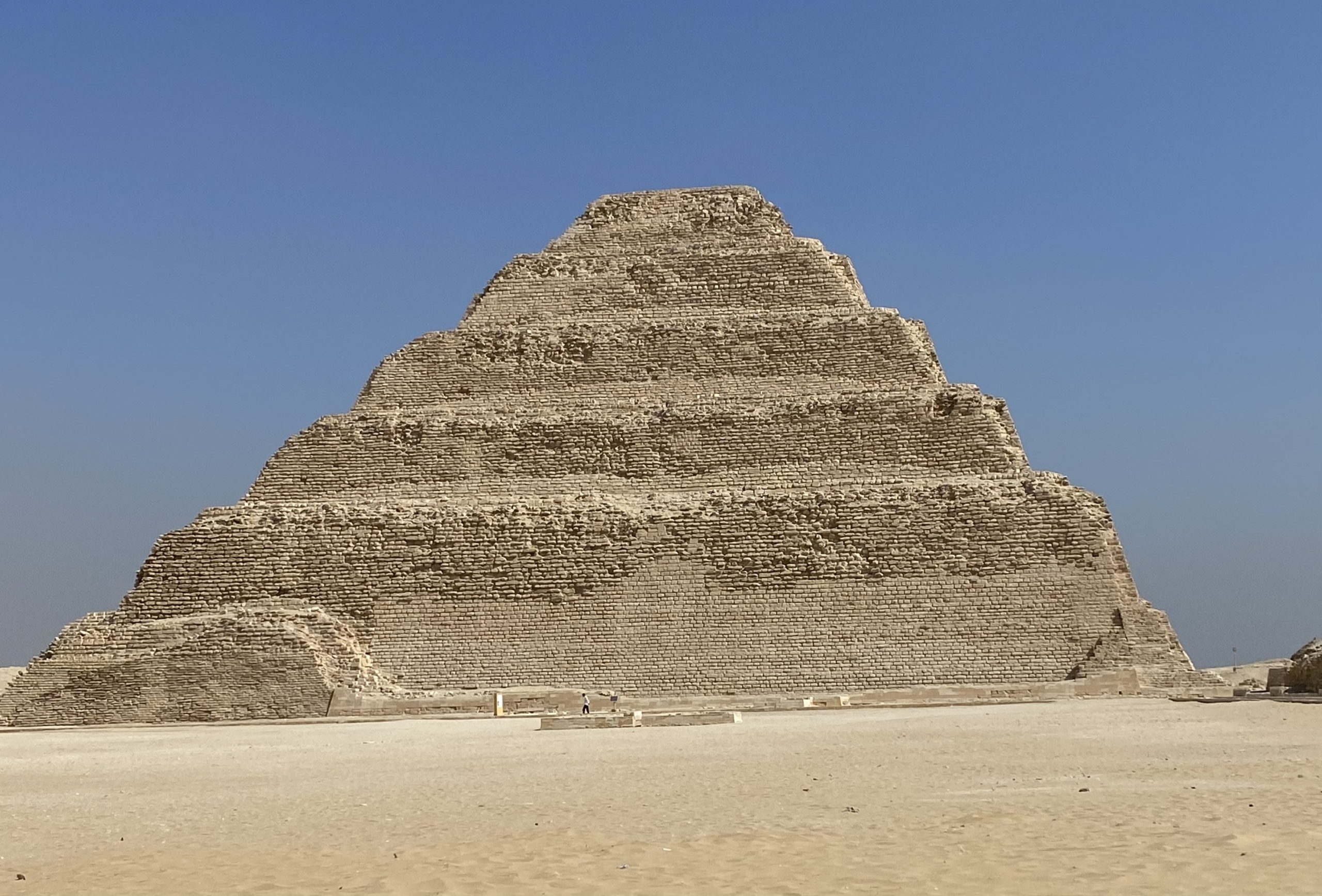 Pharaoh Djoser is believed to have reigned for either 19 or 38 years. The confusion emanates from Egyptologists not knowing if the Tax was collected annually or once every two years. Either option was long enough to have his Mortuary Complex completed. His reign, due to the fabrication of the complex, shows that Pharaoh wheedled full control over the population as well as the materials of the state which allowed him to change the Necropolis site from Abydos to Saqqara and order the building of the largest monument of its era out of hewn stone rather than mud brick.

The Step Pyramid
A 6 Tier and 4-sided Step Pyramid. The first of its type and the earliest stone building of this sort of size in Egypt. Built for Pharaoh Djoser by his Royal Vizier and Architect, Imhotep, in the 3rd Dynasty. It had a height of 62.5m and a base of 109m by 121m and was clad in polished white Limestone. The plan for which was basically followed by future generations of Egyptian Pyramid Builders.

Pharaoh’s Burial Chamber
The Chamber had been robbed in antiquity, so little remained to be examined apart from its structure. It was made of granite and was sealed closed after Pharaoh’s death with a 3.5-ton block.

The Pyramid’s Labyrinth
Nearly 6km of chambers and corridors run underneath the Pyramid, making it a real labyrinth. These chambers mimicked the Royals Palace for their Afterlife and would have provided for the needs to the Pharaoh’s family members along with the 40,000 plus goods Pharaoh would need in the Afterlife and any offerings left there by the Pharaoh’s Royal Court.

The Complex
Built on a North-South axis, the Enclosure Wall surrounds the whole Complex. It was built of Tura Limestone, was originally 10.5m high and had 14 doors, only one of which was the actual complex’s entrance, the other’s being known as False Doors which only Pharaoh’s Soul or Ka could use.

The Architect
Imhotep, the World’s First Known Architect. The first Pyramid or even Monument to be designed out of cut stones rather than sun baked mud bricks or bedrock stones allowing higher and more durable structures. But not only did he design a new structure and concept, he also invented new tools, a new Nile water irrigation systems and new equipment. On top of this he wrote it all down allowing all following Architects to literally build on his theories and constructs.

Click on the Image to see images of the Interior, the Exterior and the Materials that were used 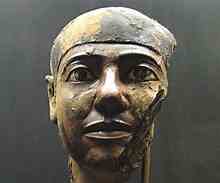 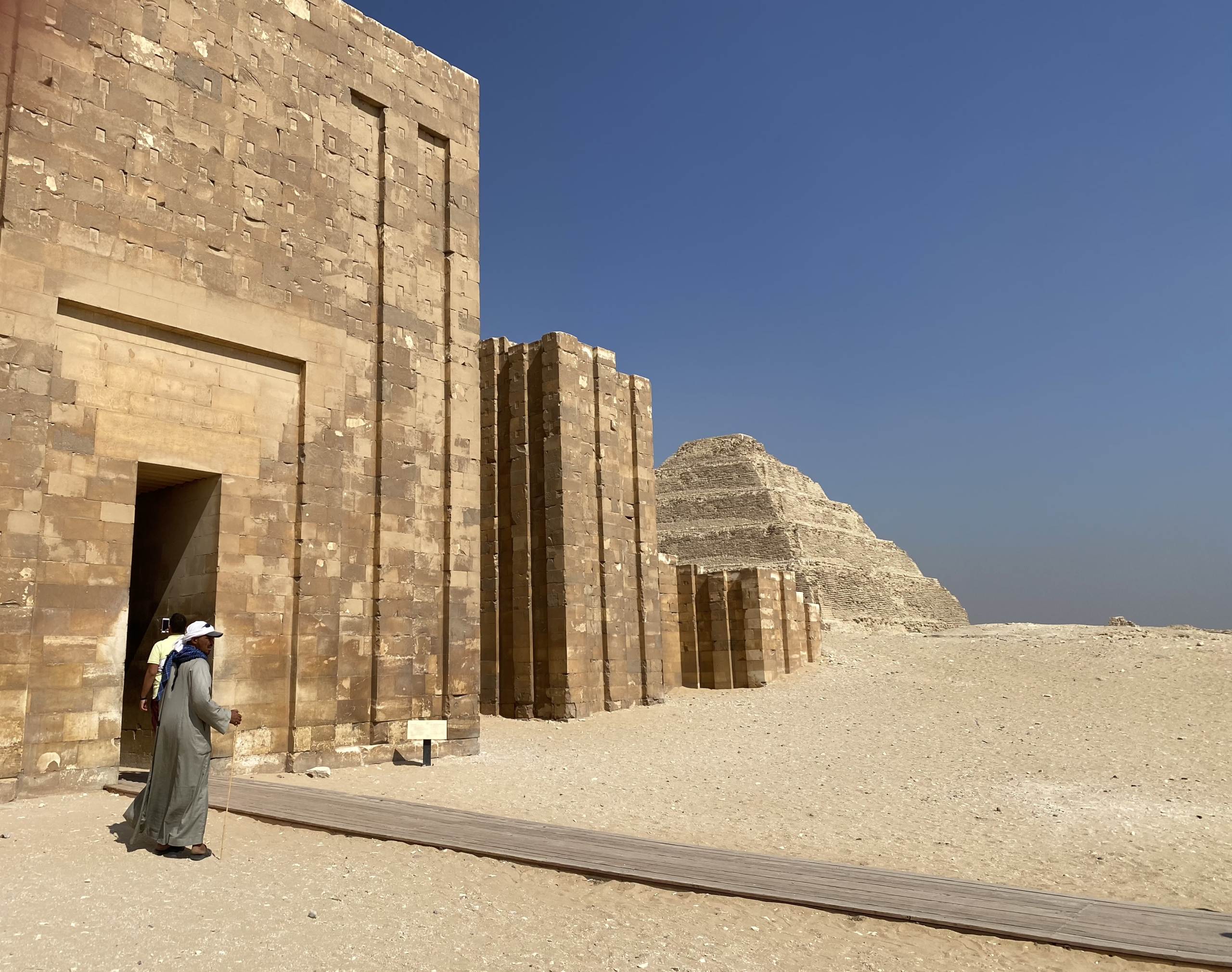 Click on the Image to see images of the Colonnade Court, the Heb Sed Festival Court, the Mortuary Temple remains, and the Serdab 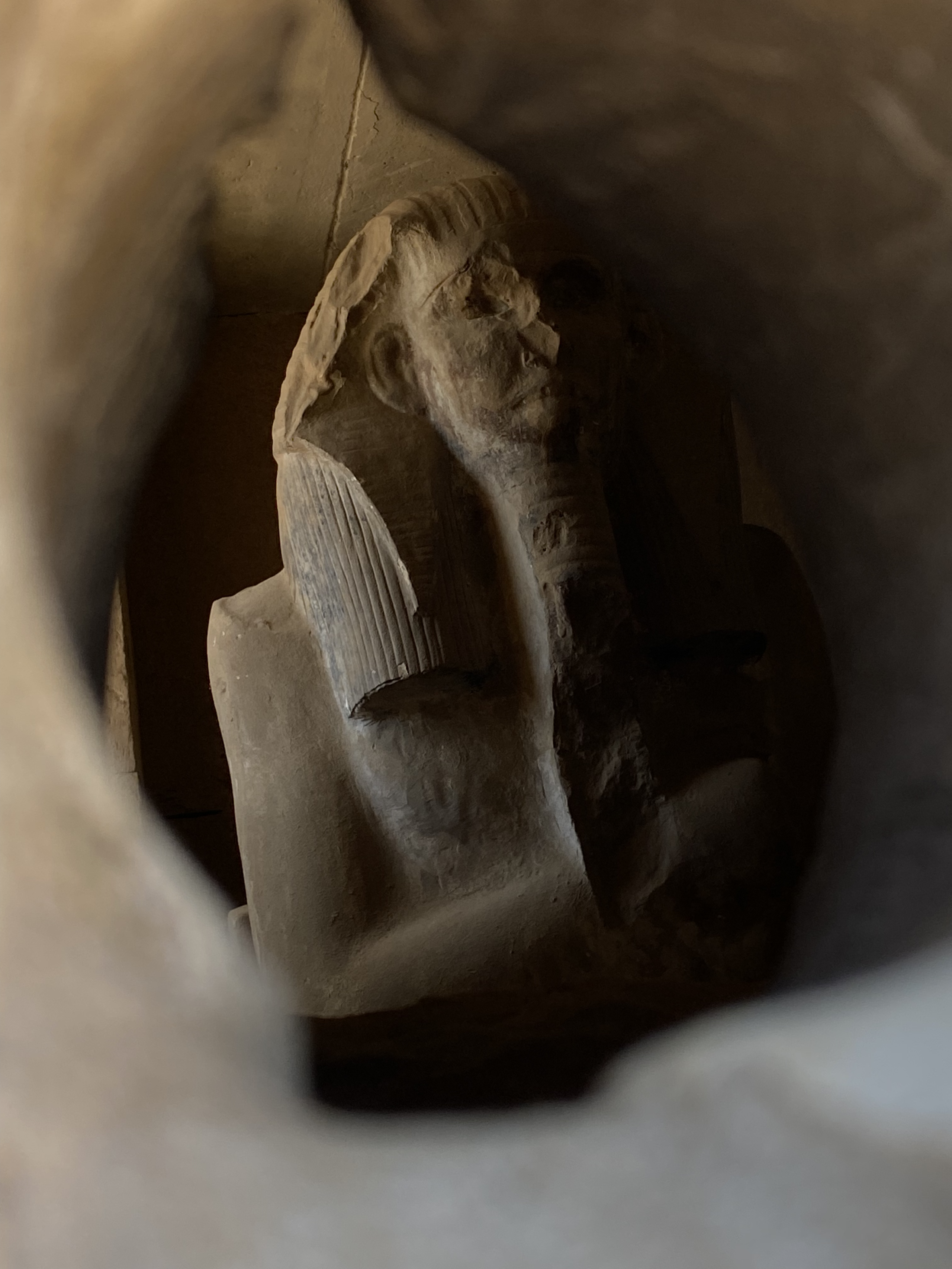 Great Trench: thought to potentially be a guard for the Pharaoh’s complex, the Trench is 40m wide and 750m long and remains the largest structure in the Necropolis.

A large court found between the South Tomb and the Pyramid inside which are the Heb-Sed Festival territorial markers which Pharaoh would run around after their 30 years on the Throne to prove that they were fit and that the Deities wished them to continue ruling. Allowing Pharaoh the option to continue his Heb-Sed Festival rituals during his eternity in the Afterlife for his own and Egypt’s continued health and wealth.

At the south of the South Court, was the South Tomb whose function has been assessed but cannot be known to be 100% guaranteed; thought to have housed the Pharaoh’s Ka in the Afterlife or the Pharaoh’s Organs in his Canopic Jars.
Entered into through a Corridor that reaches a staircase that drops 30m and then moves into a Burial Chamber of pink Granite. The stairs continue into a further 3 Blue Faience Chambers which have replicated reed matting depicted along with fine work by the Pharaoh’s artisans which ensure that Pharaoh has the visual tools to know how to reign after his death.

North Temple & the Serdab Court: as expected from its name, the North Temple is located on the north side of the Complex facing the North Star and was used for the Pharaoh’s Cult Centre to produce the daily rituals and offerings needed to assist the Pharaoh in his Afterlife.

The Inner Sanctum of the North Temple is known as the Serdab Court and this is where the Pharaoh’s Ka is represented in his Ka Statue. Its use is vast as it remains the core of the Pharaoh’s Cult Centre and is used for the Opening of the Mouth Ceremony. Lastly, the Heb-Sed Court; this is rectangular and runs parallel to the Southern Courtyard for details on the Heb-Sed Court please click here. 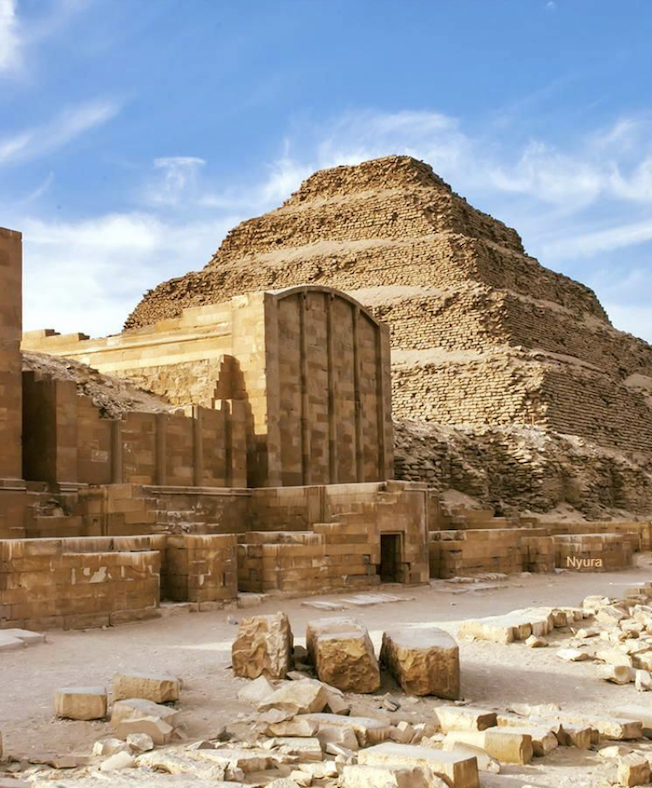