There are numerous Chapels attached to and around the Temples at Deri el Medina. Added by Pharaohs from the conception of the Village up until and beyond its abandonment as a Valley Worker’s Villager. 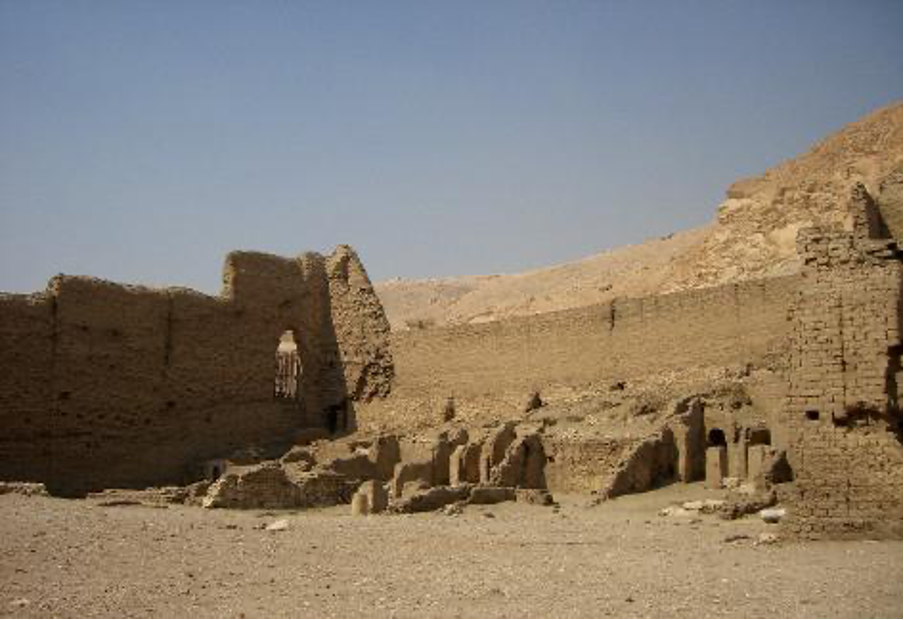 Layout: Altered during Egypt’s Coptic period when the area was used as a Monastery. Originally the Chapel consisted of a Columned and Benched Hall, Pronaos and the Inner Sanctuary which had vaulted ceilings and 3 Deity Niches 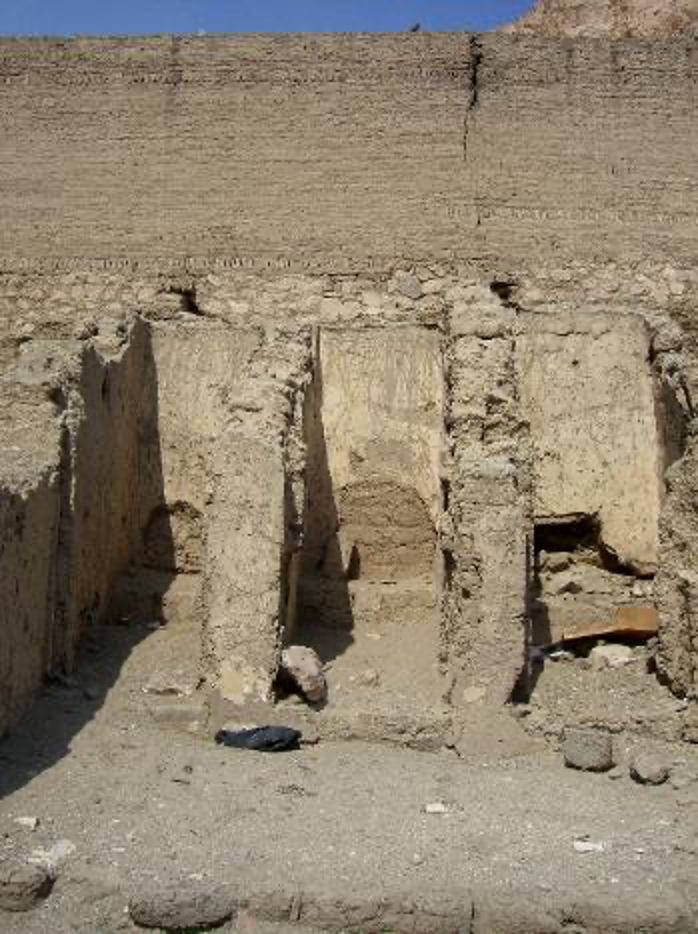 Layout: The Chapel copied its siblings and incorporated an Outer Hall, Inner Hall, Pronaos and Sanctuary. The main difference is that the Sanctuary had a single Limestone faced Niche which had a pair of figures who were squatting with their arms raised, flanking either side of the door. Again, the layout was altered during Egypt’s Coptic period when the area was used as a Monastery, as with Chapels 1, 2 and 3 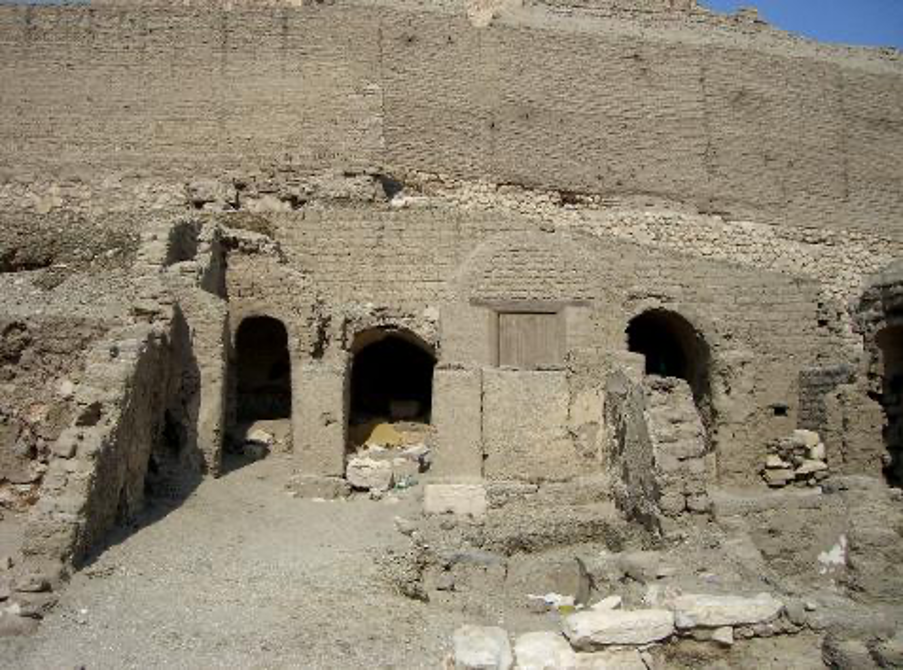 Layout: Larger than Chapel 1, it had a North and South Walled benched Outer Hall; steps led to the Inner Hall; entering the vaulted Pronaos via 2 Pillars; the Inner Sanctuary was decorated with the painted Cartouches of Pharaoh Thutmoses III and it had 2 Deity Niches; lastly the Enclosure bordered the Southern Walls of the Inner and Outer Halls. Similar to Chapels 1, 3 and 4, it was altered during Egypt’s Coptic period when it was used as a Monastery 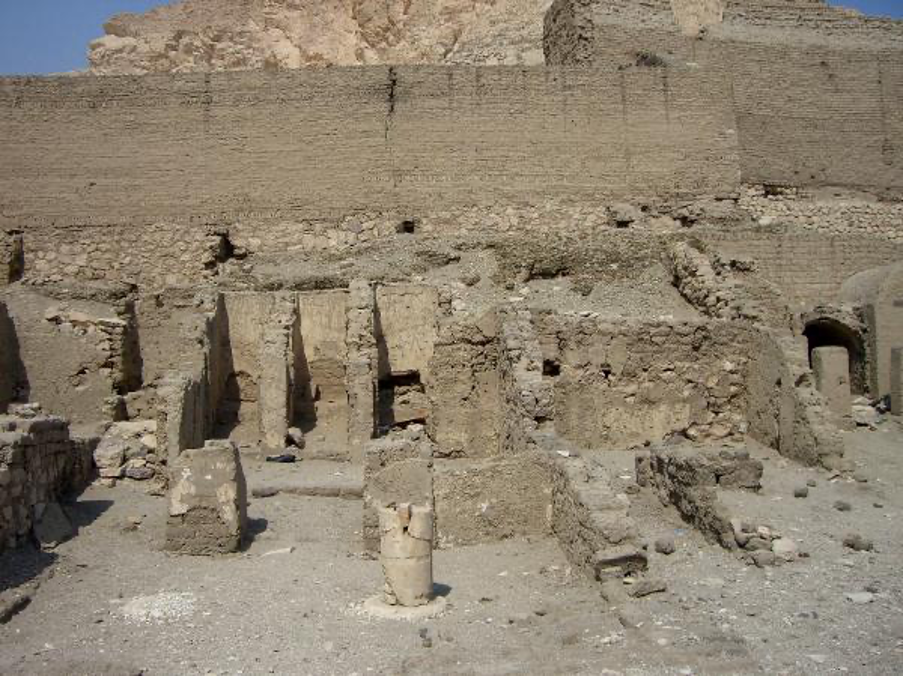 Layout: Altered during Egypt’s Coptic period when the area was used as
a Monastery as with Chapels 1, 2 and 4. Smaller than Chapel 2, it had a
North and South Walled benched, with 2 Columned Inner Hall; the
Pronaos was again defined by 2 Pillars and led in to the Sanctuary, but
before the Sanctuary; to its South were stairs which led to a Rock
Terrace above the Chapel; finally, the Sanctuary was hewn out of the
rock and originally contained 1 Niche which was subsequently upgraded to 3 Niches

Chapel of Pharaoh Seti I

Where: North of Enclosure Wall of main Temple of Hathor

Layout: Entering into the limestone paved Forecourt from the southeast via a ramp which was flanked wither side by 10 steps; follows on into a double columned Outer Hall via 5 steps; then a Hypostyle Inner Hall via 2 steps; 7 steps up to a Pronaos; and, lastly, 7 steps in to the Sanctuary with a left annex for storage 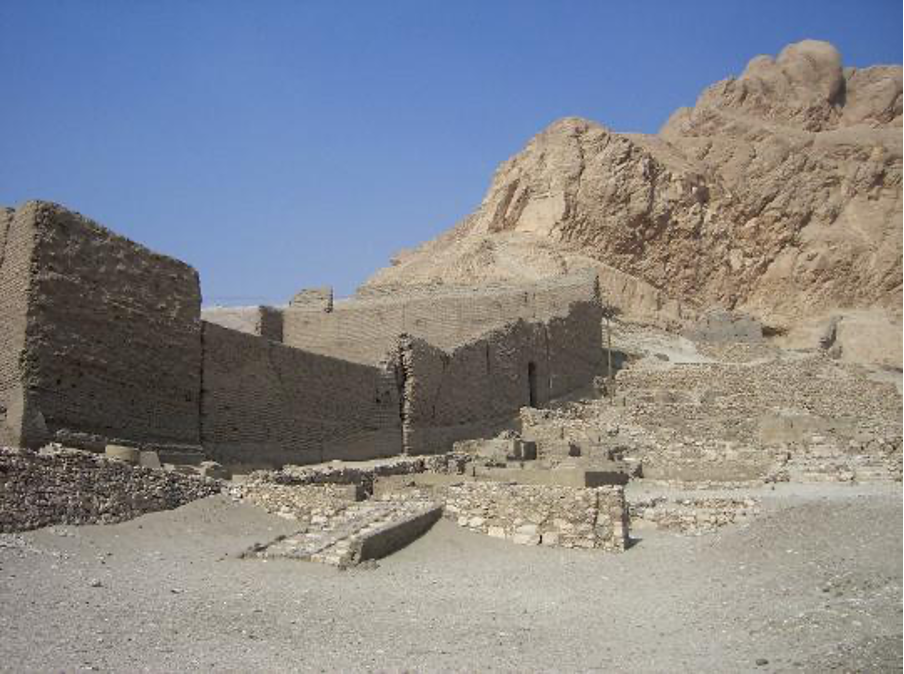 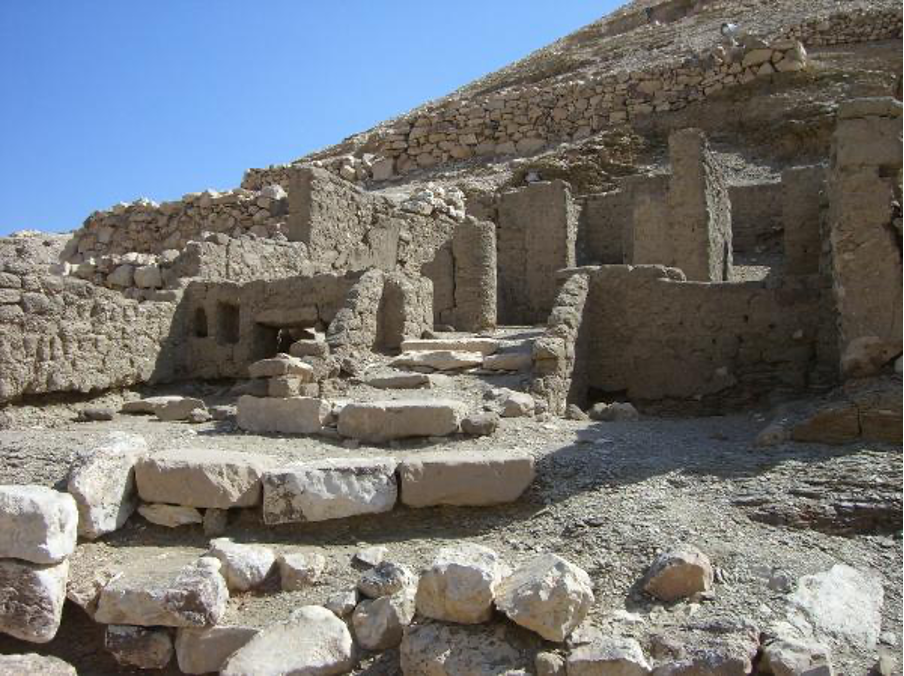 Where: It was cut into the Cliff of the Qurnet Mura’i, East of the Enclosure Walls of the Ptolemaic Temple of Hathor

Layout: A Hall, Pronaos and Sanctuary. Entrance to the Hall was via steps, inside it had benches along the Northern and Southern Walls; climbing up steps to the duel columned Pronaos which led into the benched 3 Niched Sanctuary. The Chapel was repurposed as Christian Church during the Coptic Period 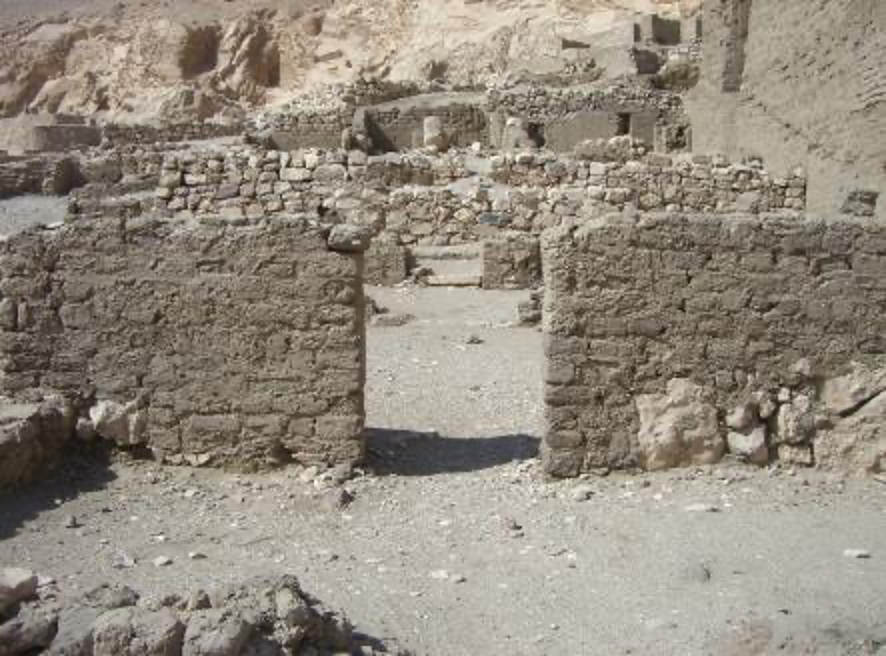 Where: Lower part of Cliff of the Qurnet Mura’i, Southwest of the Enclosure Walls of the Ptolemaic Temple of Hathor and ran parallel to its Wall, on the even Valley Floor

Layout: As with most other Chapels in the area, it had a Forecourt, Outer Hall and Inner Halls, Pronaos, Sanctuary and a side Annexe. The Forecourt could be entered through the North or South doorways 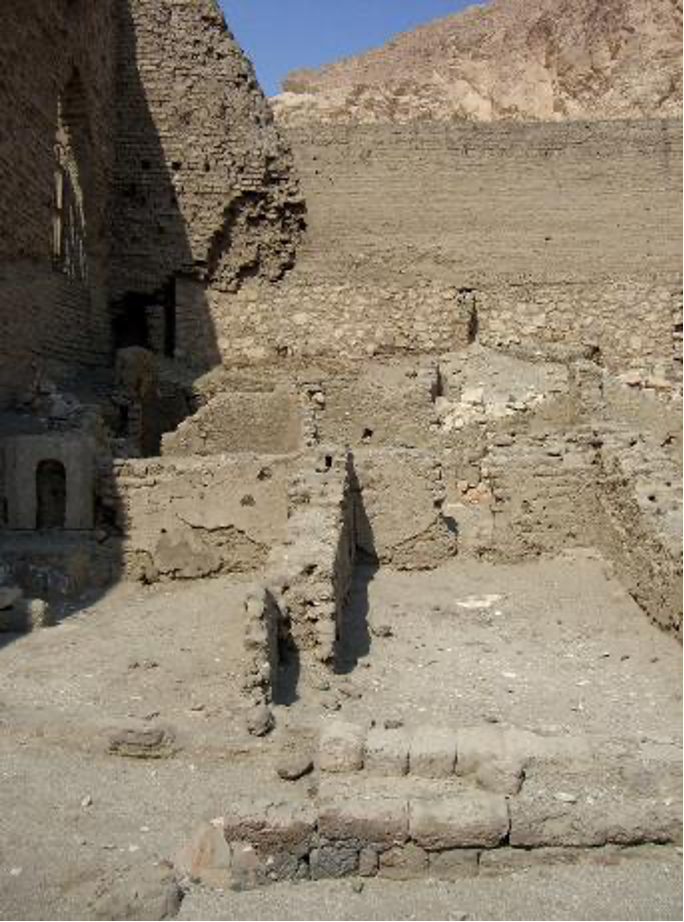 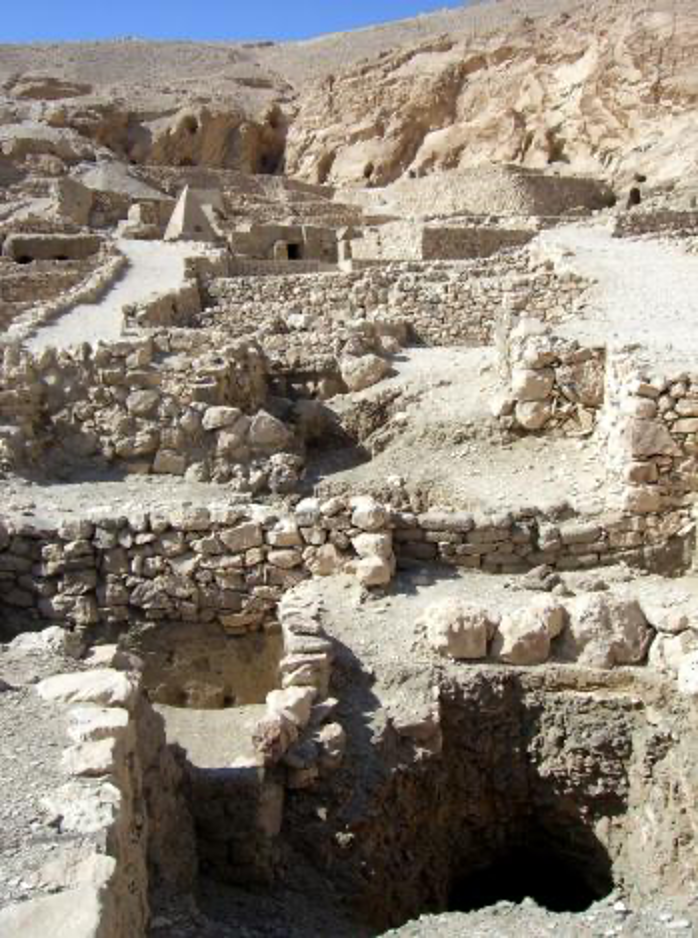 Where: Southwest of Chapelle Votive 1

Layout: Constructed to include an erratically formed Forecourt; Outer and Inner Halls; a Pronaos and a Sanctuary. The Forecourt was reached via terraces and stairs; the Outer Hall had a rectangular shaped pit which could be a remainder from an earlier House, localised houses related to the time of Pharaoh Thutmoses I.

The Outer Hall led to the Inner Hall had 2 Limestone Benches again the North and South Walls, these are the only remaining from a total of 12 Limestone Benches. 4 steps took the devotee up to the Pronaos and the Inner Sanctuary which had 3 Niches and its own benches. 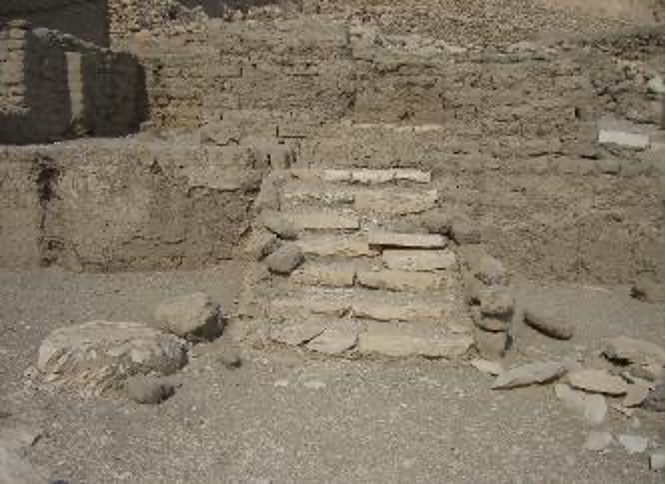 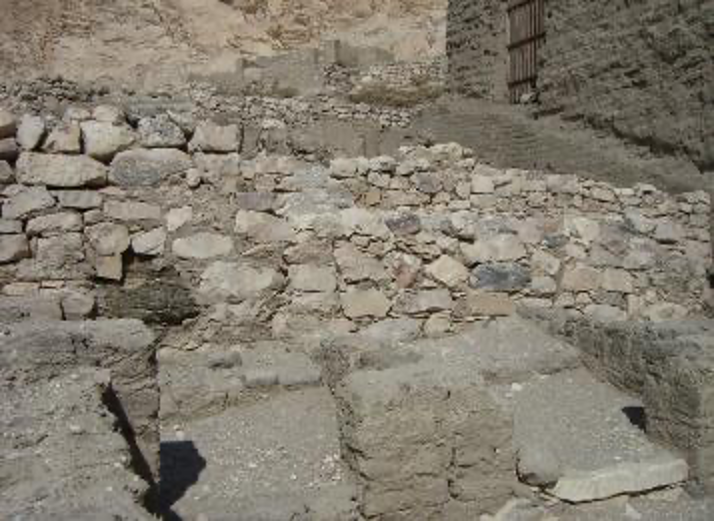 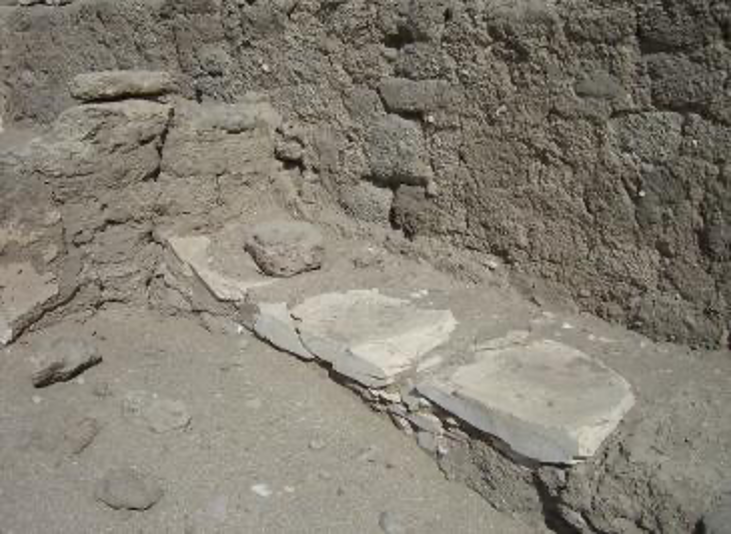