Partially built in the 30th Dynasty, under the instructions of Pharaoh Nectanebo, after the rest of the Precinct had long been established. The Pylon was never finished as can be seen from inside the First Courtyard with the ancient mudbrick scaffolding remaining in situ. What was completed of the Pylon made it 113 meters wide with a depth of 15 meters, its height changes in different areas.

Before the 1st Pylon was erected, this was the Forecourt to the Temple. It was constructed in the 22nd Dynasty and originally its Avenue of Sphinx lined up as a pathway to the Nile Canal on the Ancient Cult Terrace. 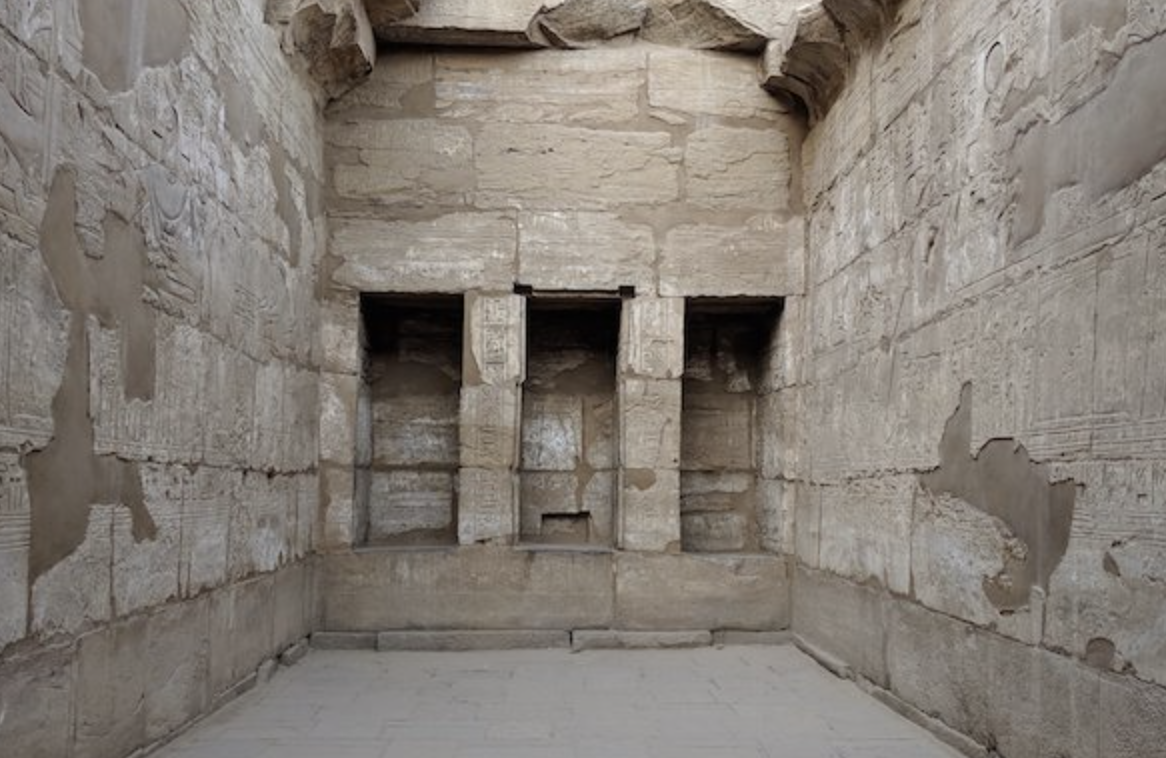 The right side echoes the left with the moved Avenue of Sphinx Statues and behind them are Columns which hold a small walkway’s roof.

The Columns on both sides of the Courtyard were commissioned by Pharaoh Shoshenq I of Dynasty 22. They are undecorated compared to the Columns in the Hypostyle Hall; these only have 5 Bands around them with Flower Bud like tops.

Against the back of the 1st Pylon, as mentioned above, you can see the ancient mudbrick scaffolding which remains in situ. 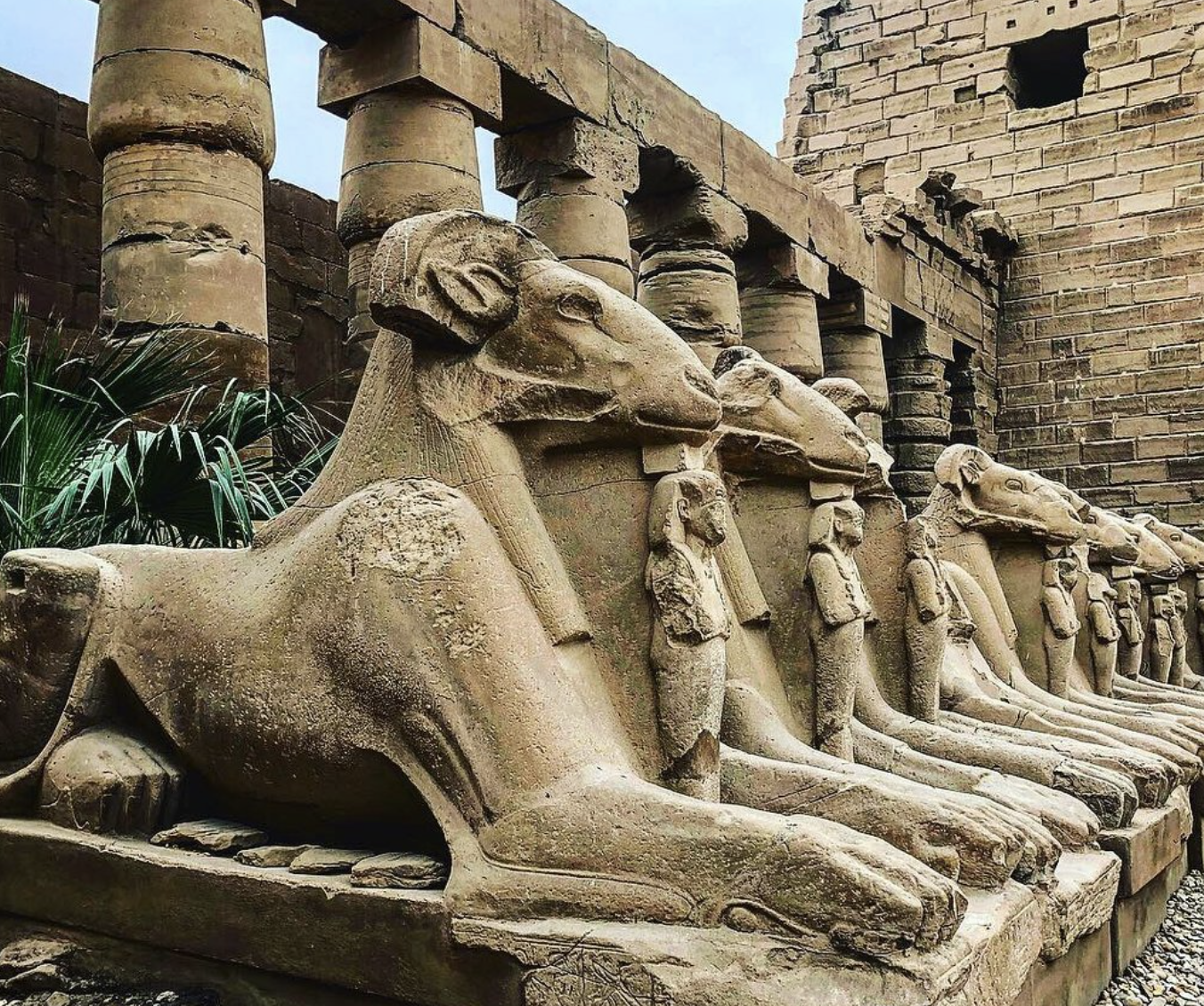 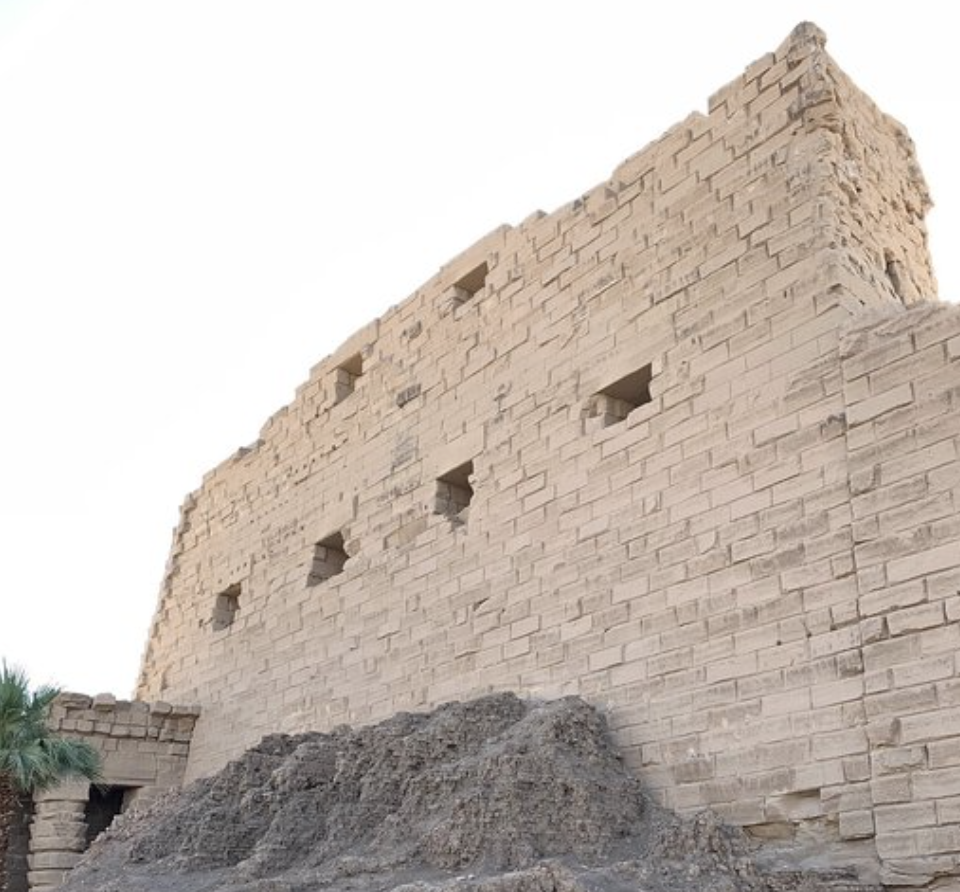 On entering the First Courtyard you can see the Barque Shrines of Pharaoh Seti II to your left. These were commissioned to act as a Chapel for the 3 Sacred Barques of the Theban Triad: The God Amun, his consort, the Goddess Mut, and their son, the God Khonsu. Click here to learn more about the Theban Triad.

The Chapel is roughly 7 meters tall and has sloping Walls which are adorned with convex mouldings. God Amun’s repository is in the centre and his doorway measurers 4.5 meters high, whilst the two repositories for his family are each nearly 3.8 meters high: Goddess Mut is hosted on God Amun’s Left, whilst his son, God Khonsu, is to his right.

Each Repository had its own Niches which would have held Statues of the Deity it held. The Reliefs throughout show Pharaoh making offerings to the Deities and receiving their blessings in return. The Chapels were built out of Sandstone with quartzite adornments.

Beyond the Chapel are the moved Avenue of Sphinx Statues and behind them are Columns which hold a small walkway’s roof. 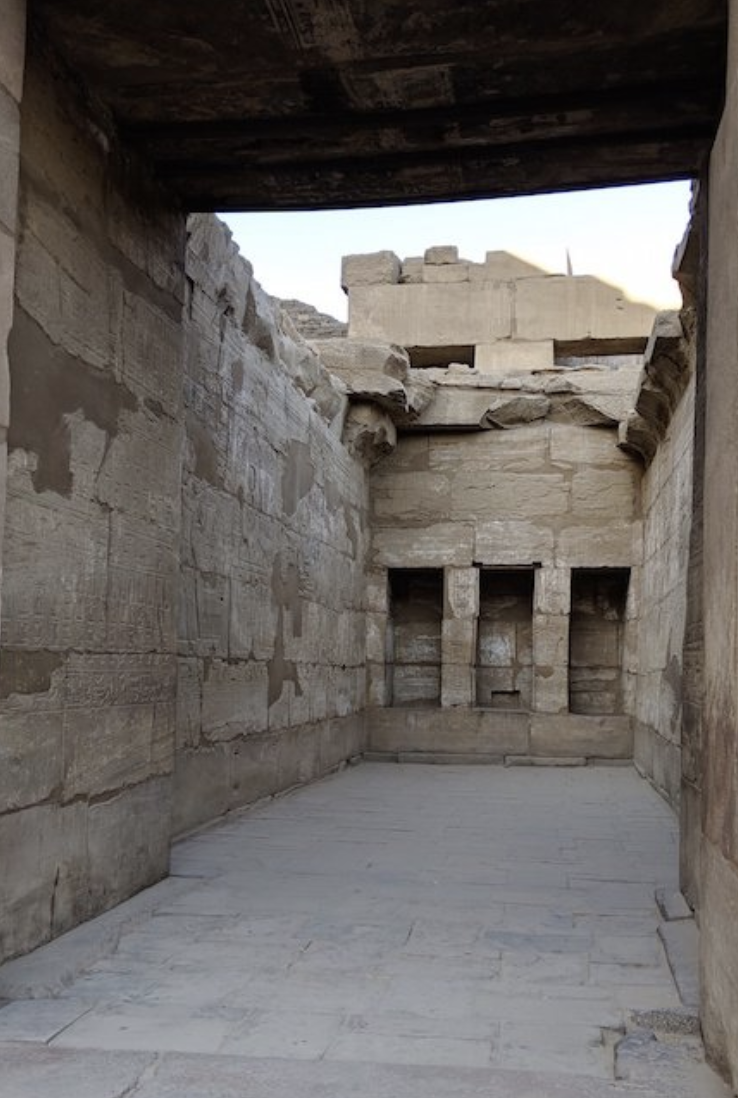 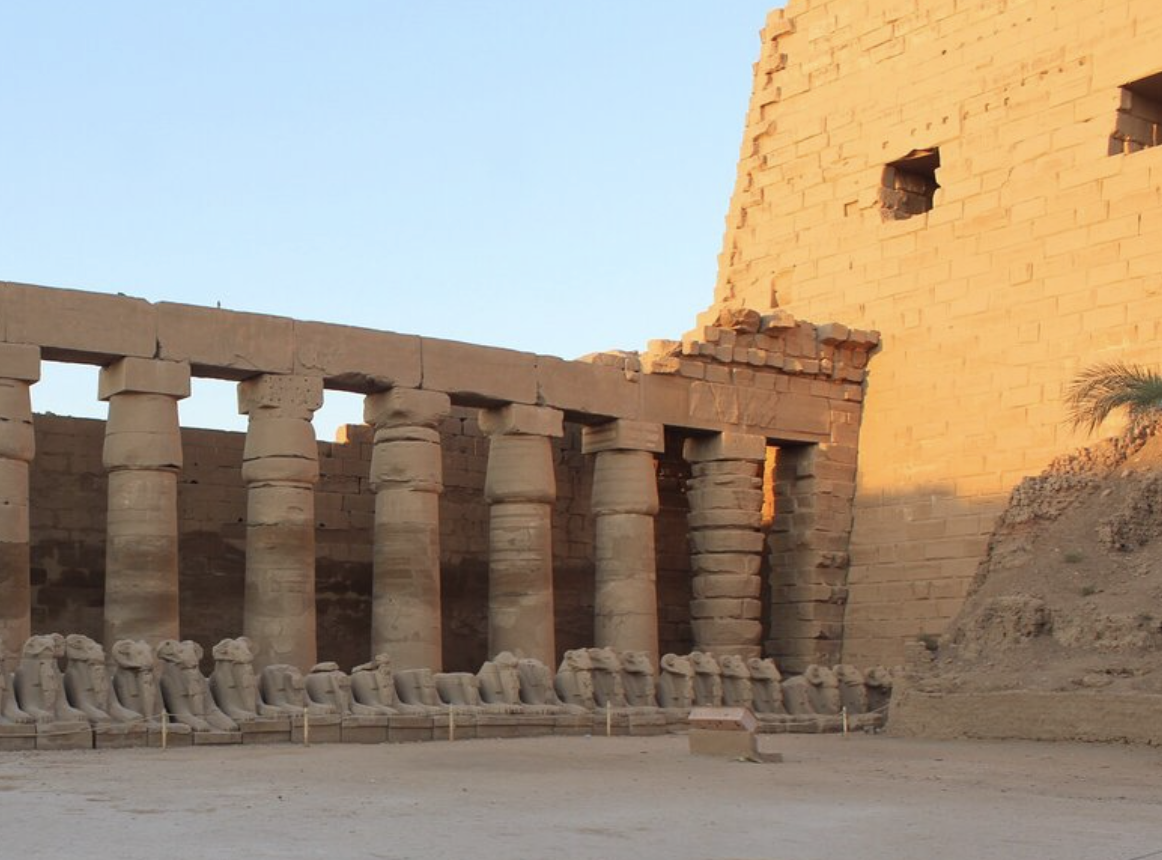 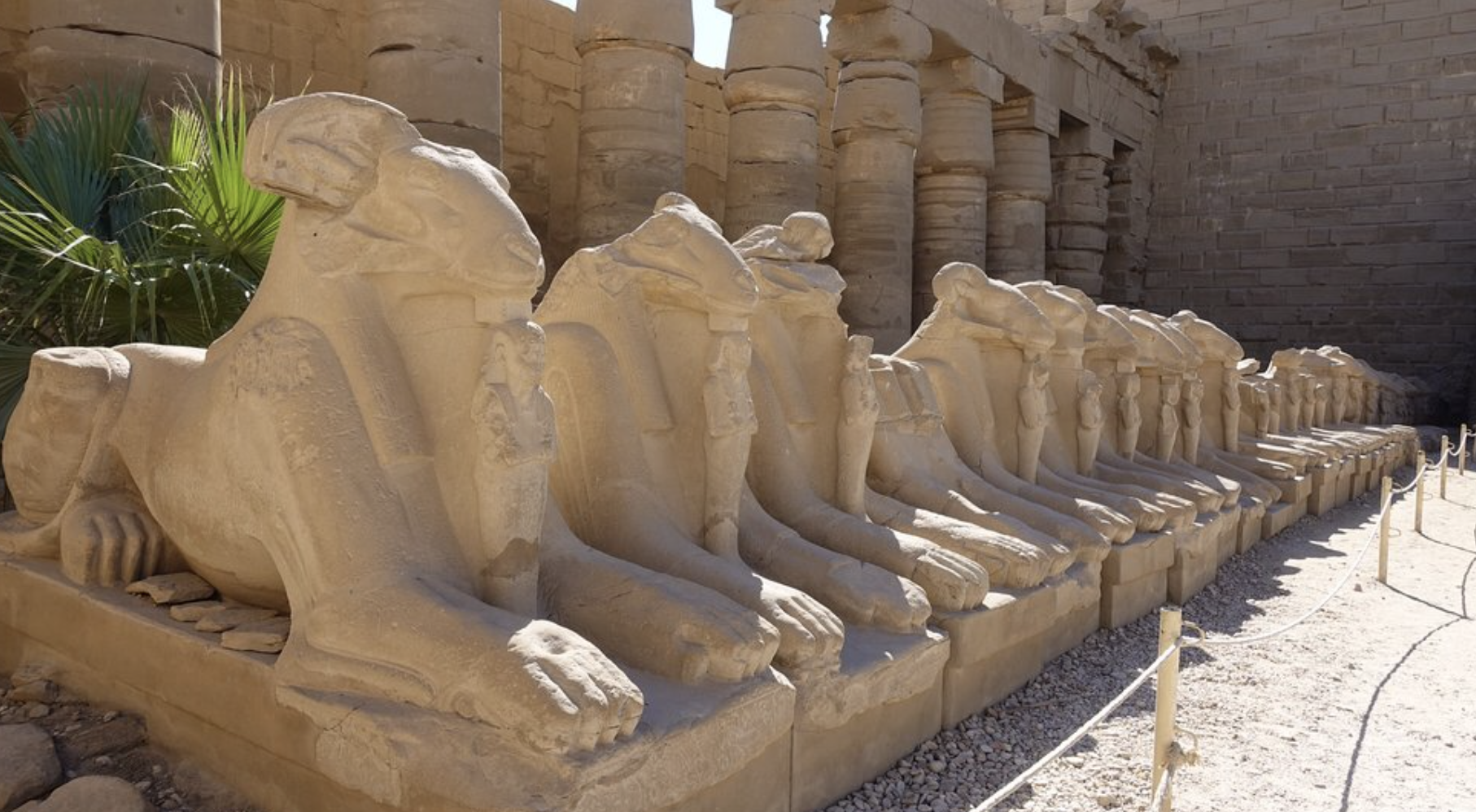 The freestanding Columns directly ahead are the remains of Pharaoh Taharqa’s Kiosk, or small open sided Chapel structure in which the Columns supported the Roof. This would have been placed here as the “official” entrance into the Precinct; aligning Pharaoh Taharqa’s and his later compatriots of Pharaoh Psamtik II and Pharaoh Ptolemy IV, with the ancient Religion and the Deities that Karnak supports. Originally it was formed from 10 Papyrus styled Columns which each reached a height of 21 meters and were approx. 3 meters in diameter. 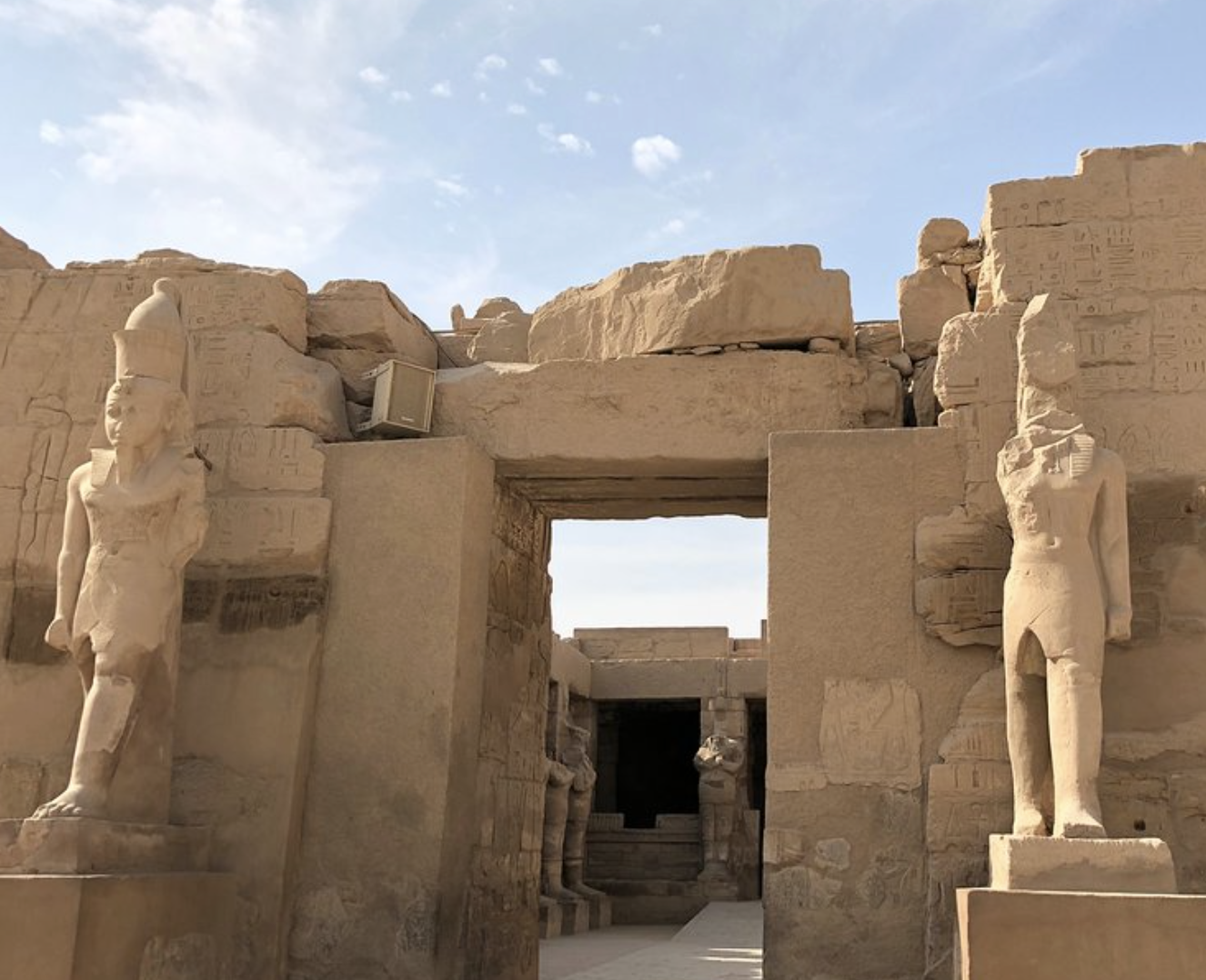 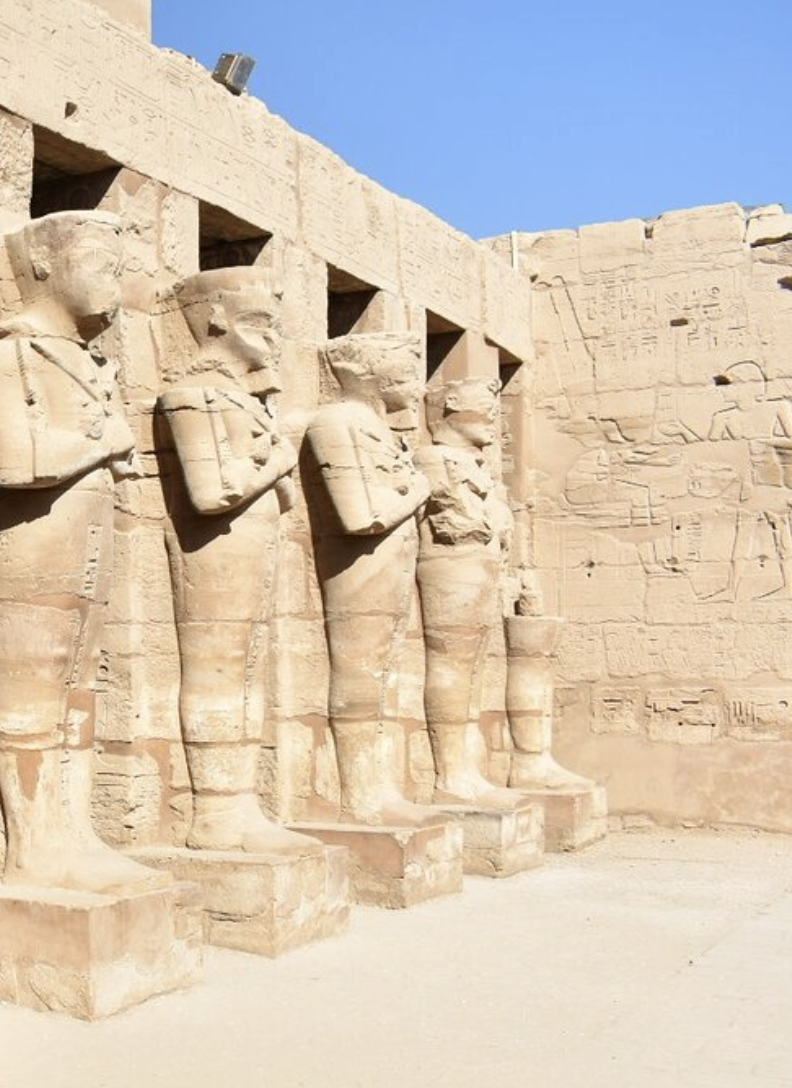 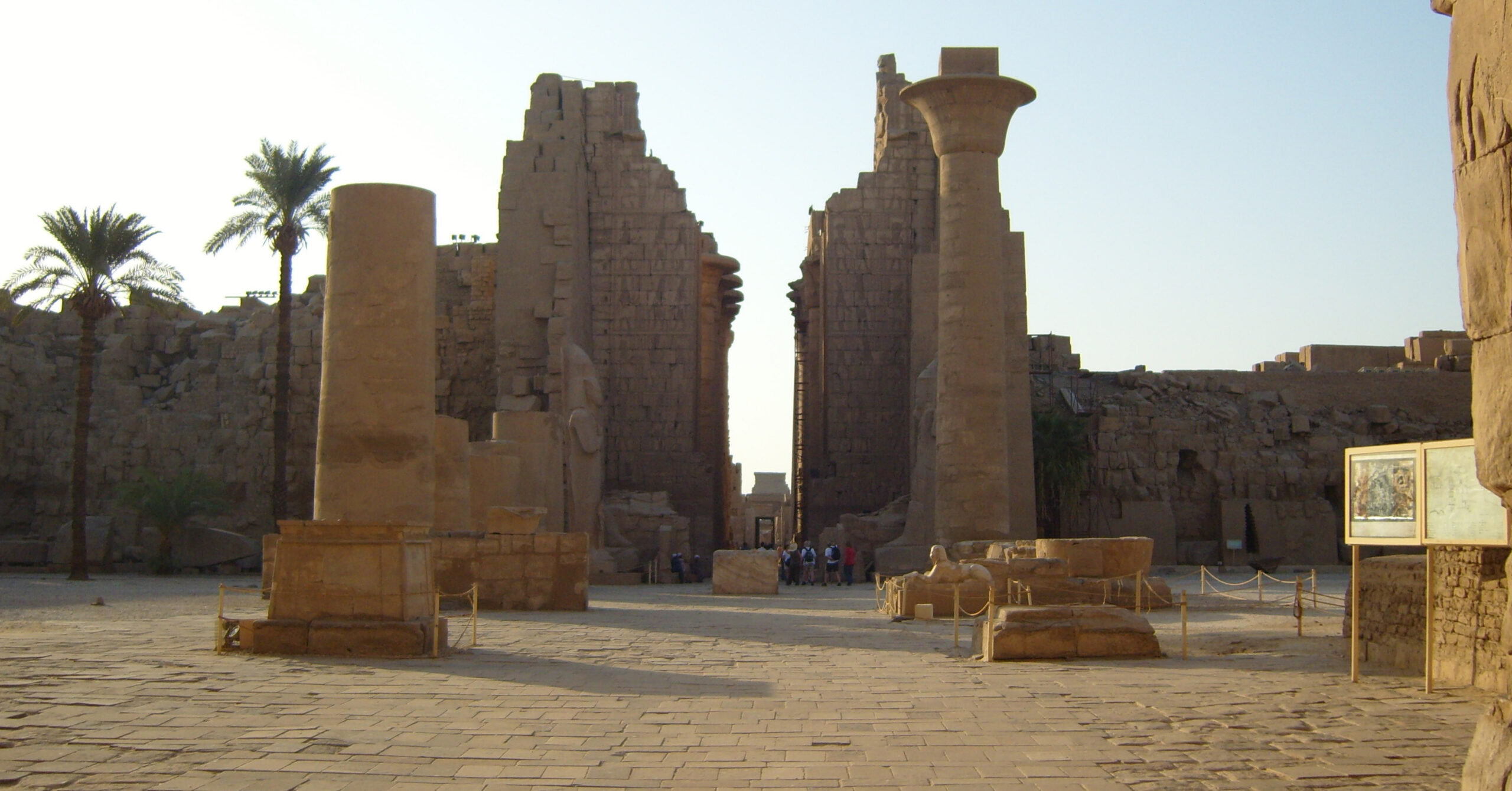 Across from these Columns to the right is the entrance to the small Temple of Pharaoh Ramses III.

Created as his own Barque Chapel to the Theban Triad. Entered via its own small Pylon with Reliefs showing Pharaoh killing captives in the presence of the Deity Amun Ra. To learn more about Pharaoh Ramses III and the Battles against the Libyans and the mysterious Sea Peoples he fought, click here.

The Pylon still has the remains of the Red Sandstone made 6 meter tall Statues pf Pharaoh which flank the entranceway. Internally, the Temple has 16 Osiride Statues of Pharaoh dressed in his Heb Sed Festival clothing, surrounding the small First Court, on one side the Pharaoh wears the Deshret Red Crown of Lower Egypt and on the other Pharaoh wears the Hedjet White Crown of Upper Egypt. For more details about the Crowns, how they differed and what they represented, click here. The Inscriptions for each of the Statues refer to how the God Amun Ra, and one of his supporting deities, are giving life to Pharaoh. Apart from one those Reliefs which are dedicated to God Ptah and Goddess Mut. This is to prove that Pharaoh is in contact with the Deities and is reverred as one of them.

Moving further inside, you reach the 4 Columned Antechamber for the 8 Columned Hypostyle Hall, before entering the Inner Sanctum’s 3 Barque Chapels for the Theban Triad. 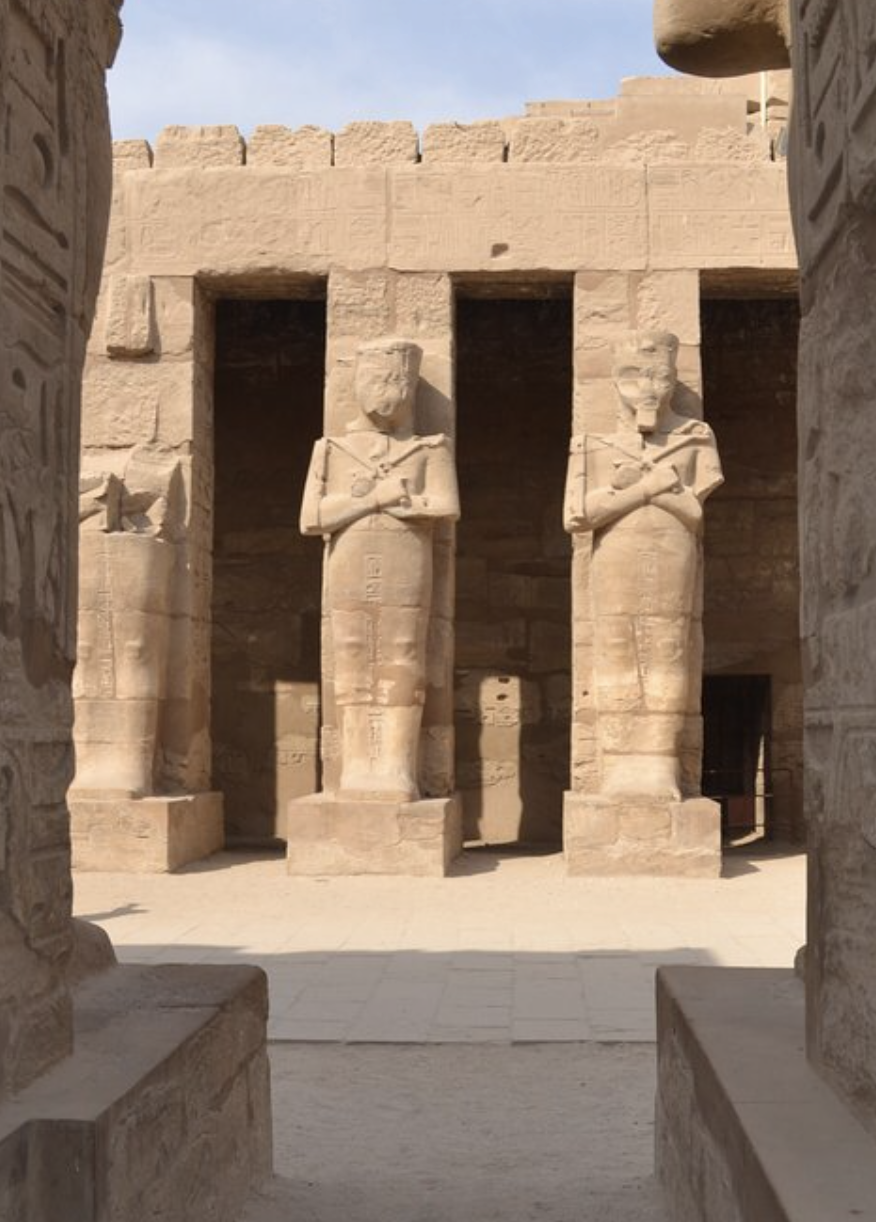 Lastly, again to the right, and behind the Temple of Pharaoh Ramses III, is the Bubastis Portal, sounding very much like a form of time travel. Erected on order of Pharaoh Shoshenq I, it records details of his victory against the peoples who lived in the areas of Syria and Palestine. On walking through the portal, you can bypass much of the Temple and arrive near the Temple of Khonsu and the Open-Air Museum.

To visit Pylon 2 and the Hypostyle Hall, click here 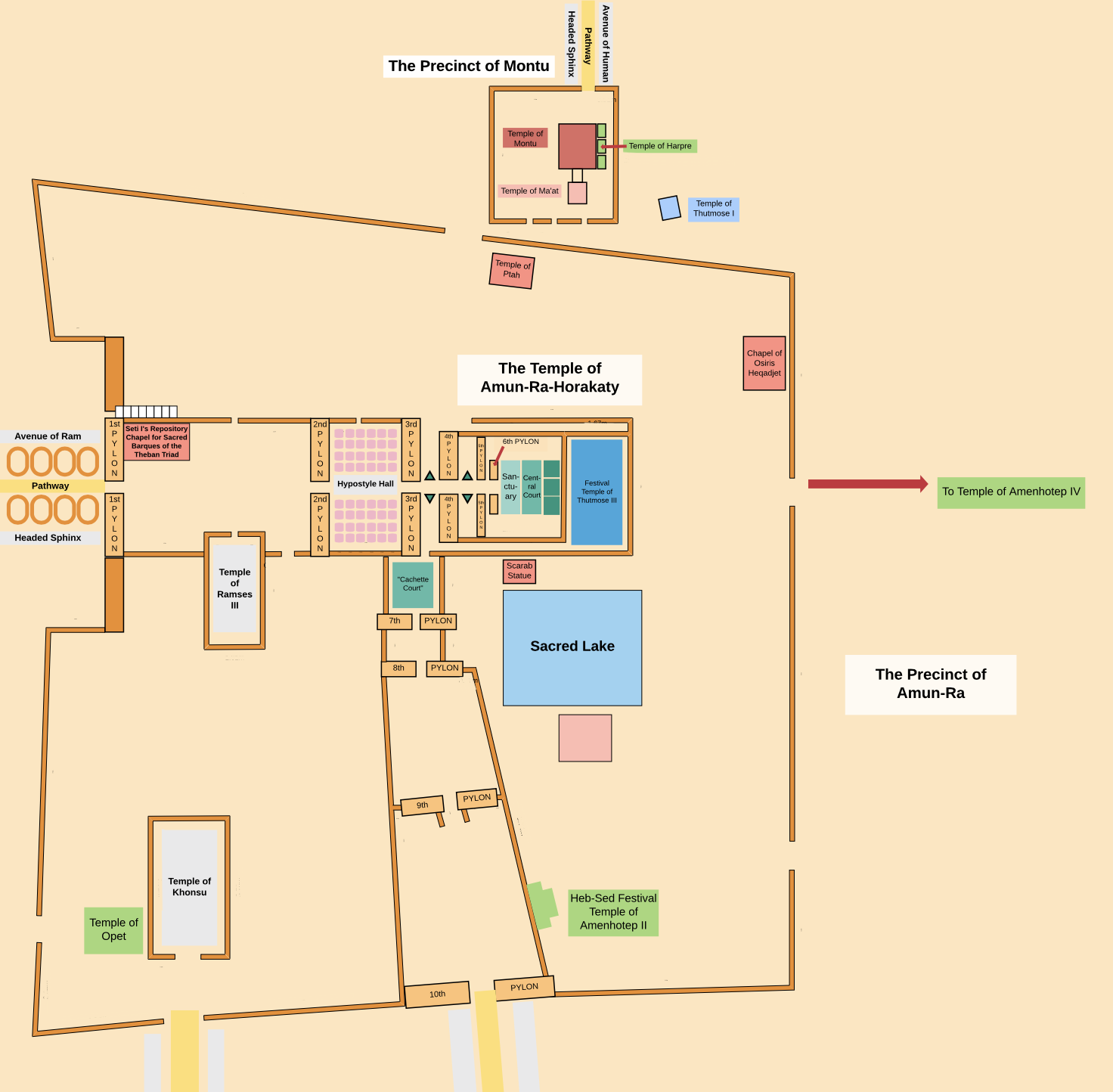 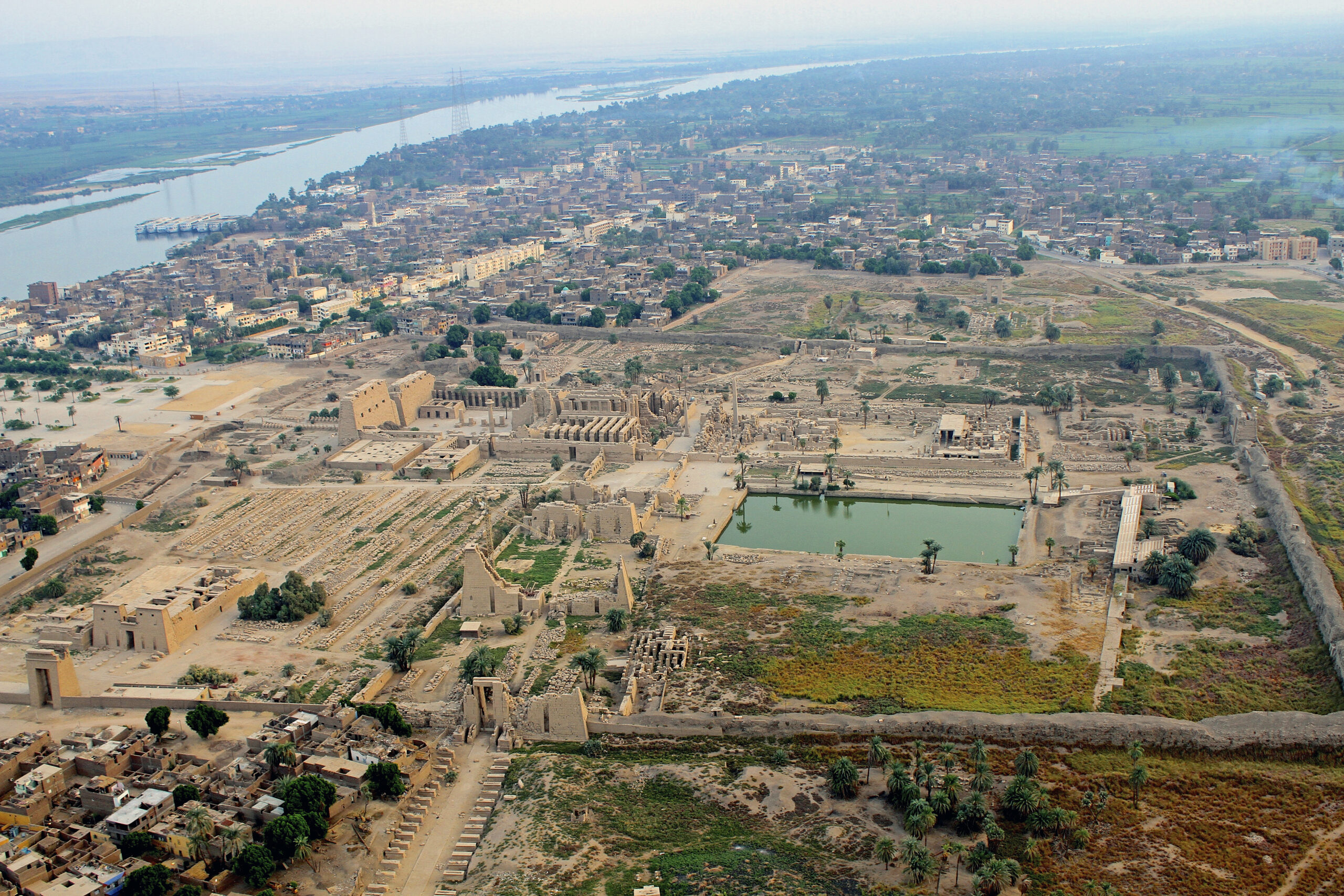