The Precinct of Amun Ra has many “Mini Temples”, not literally miniature models of Temples, but Temples that are very much smaller on their scale than the Temple of Amun itself! These are interesting by the diverse nature of the Deities they celebrate and the way in which they show for how long the Precinct was used by the Pharaohs of Ancient Egypt. I will review the Mini Temples of: 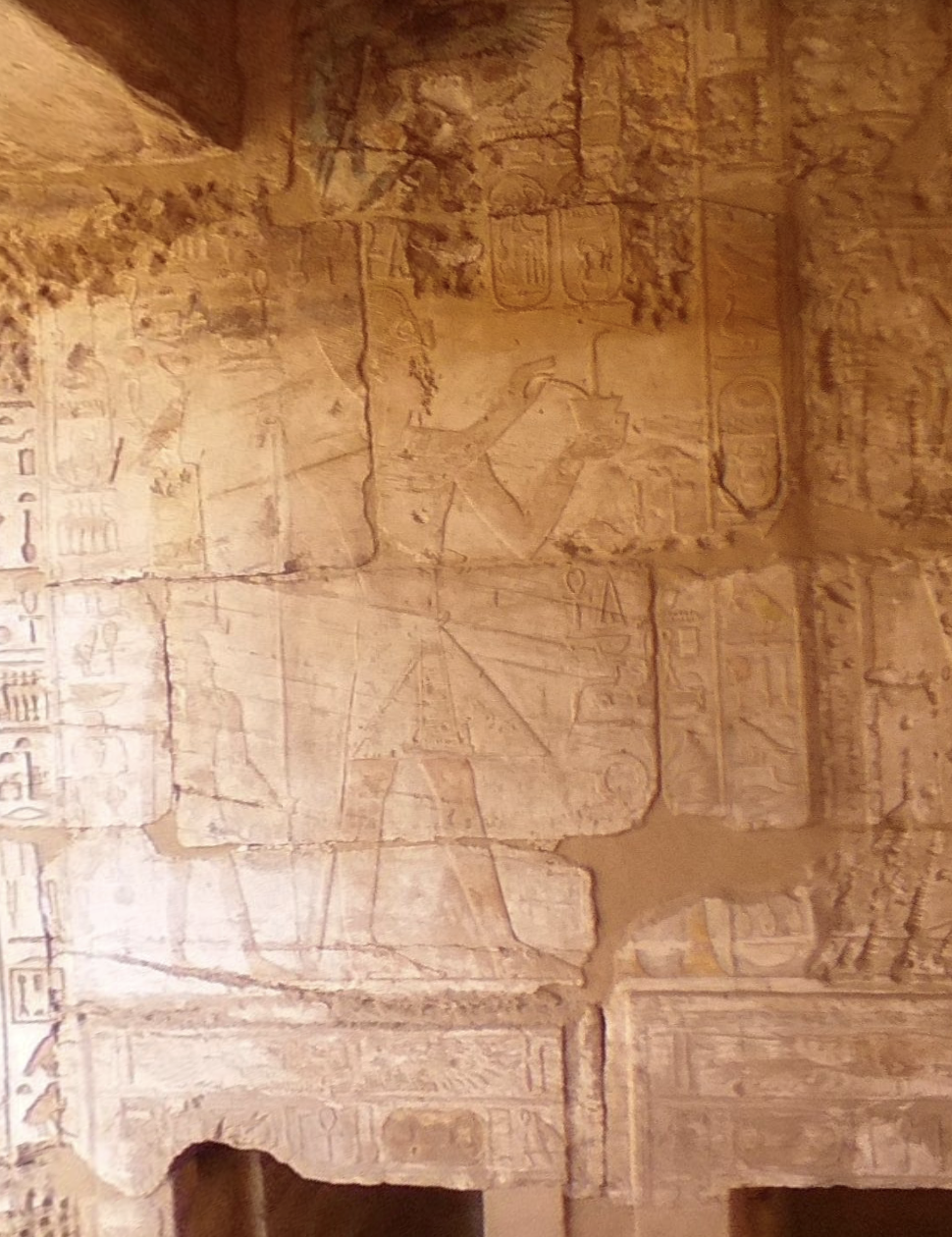 The Temple of Ptah

Commissioned in the Middle Kingdom Period but really formulated by Pharaoh Tuthmose III before it was enlarged by the Ptolemaic Period.

The Temple is dedicated to the God Ptah, his wife the Goddess Sekhmet and their son the God Nefertem. It has 6 Gateways which come in quick succession to any visitor.

Immediately behind the final Gateway is where the Sanctuaries of Ptah and Sekhmet are found. 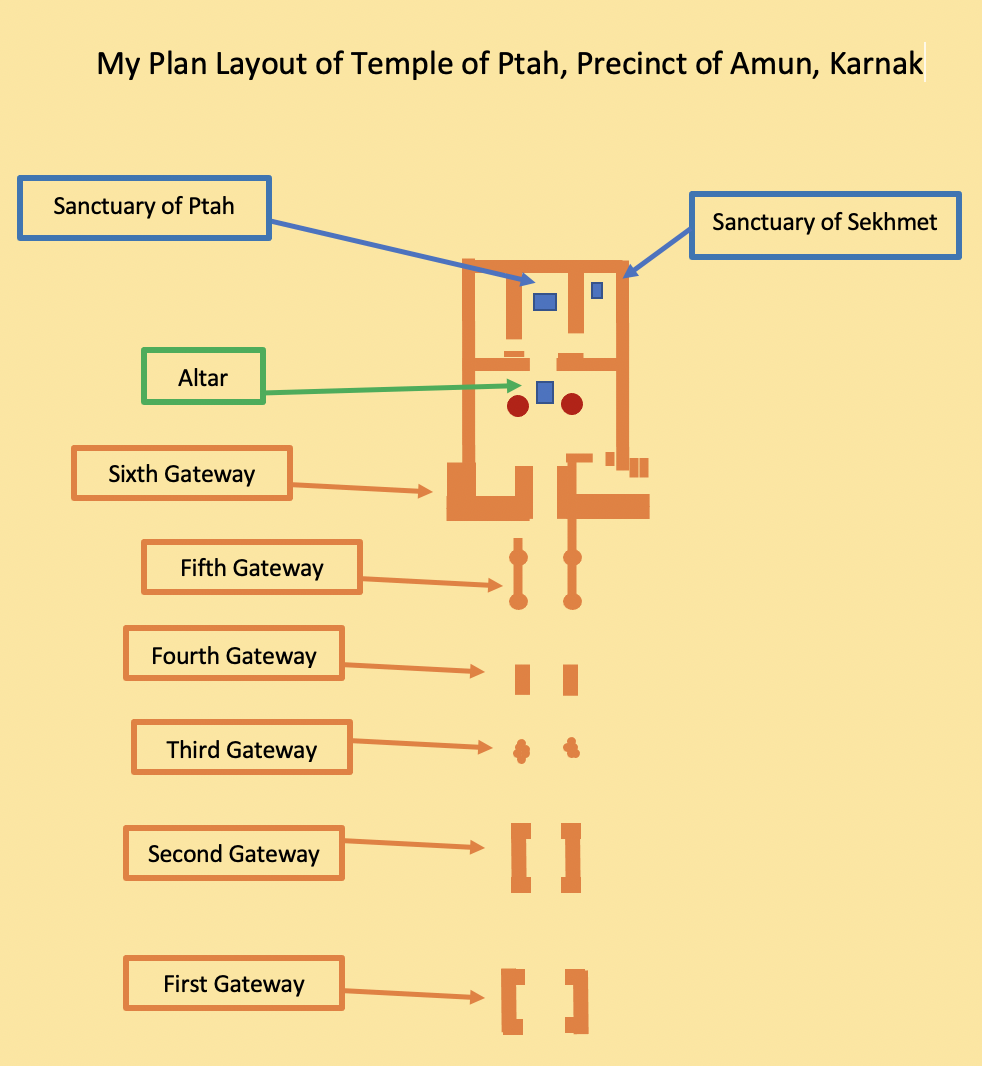 Temple to the Ruler of Eternity, the Chapel of Osiris Hek-Djet which Egyptologists are surmising may have been built by the 22nd Dynasty Pharaoh Osorkon IV and finished by the overlapping 23rd Dynasty. The Temple itself consists of a small Enclosure Wall, an Entrance Gateway, a Columned Courtyard into the Temple’s Inner Sanctum. The Gateway is decorated with Reliefs and the Cartouches of a Nubian Pharaoh who we understand to be Shabaka.

In the Inner Sanctum there is a Relief depicting two Pharaohs who are:

The 2 Pharaoh’s were Father and Son. 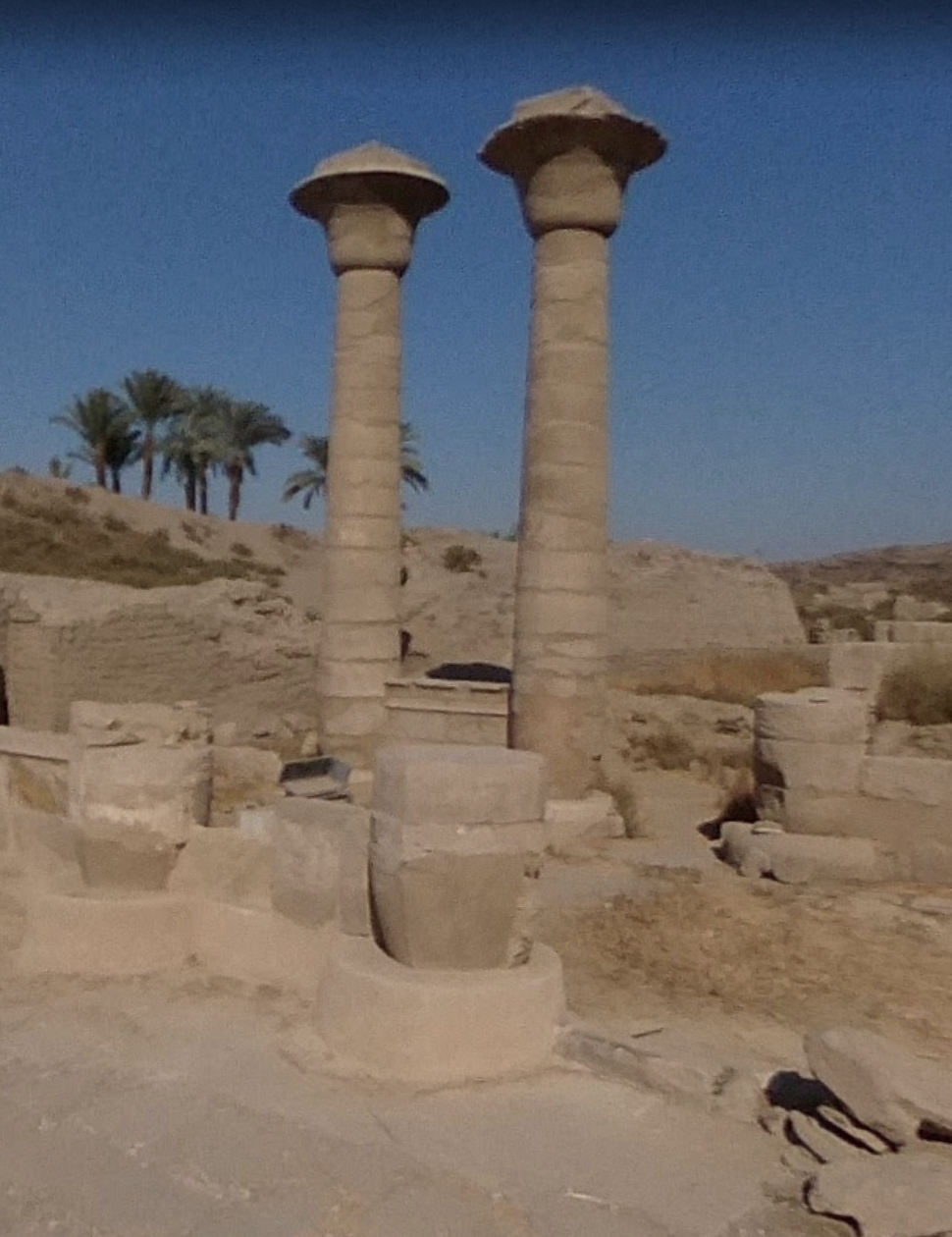 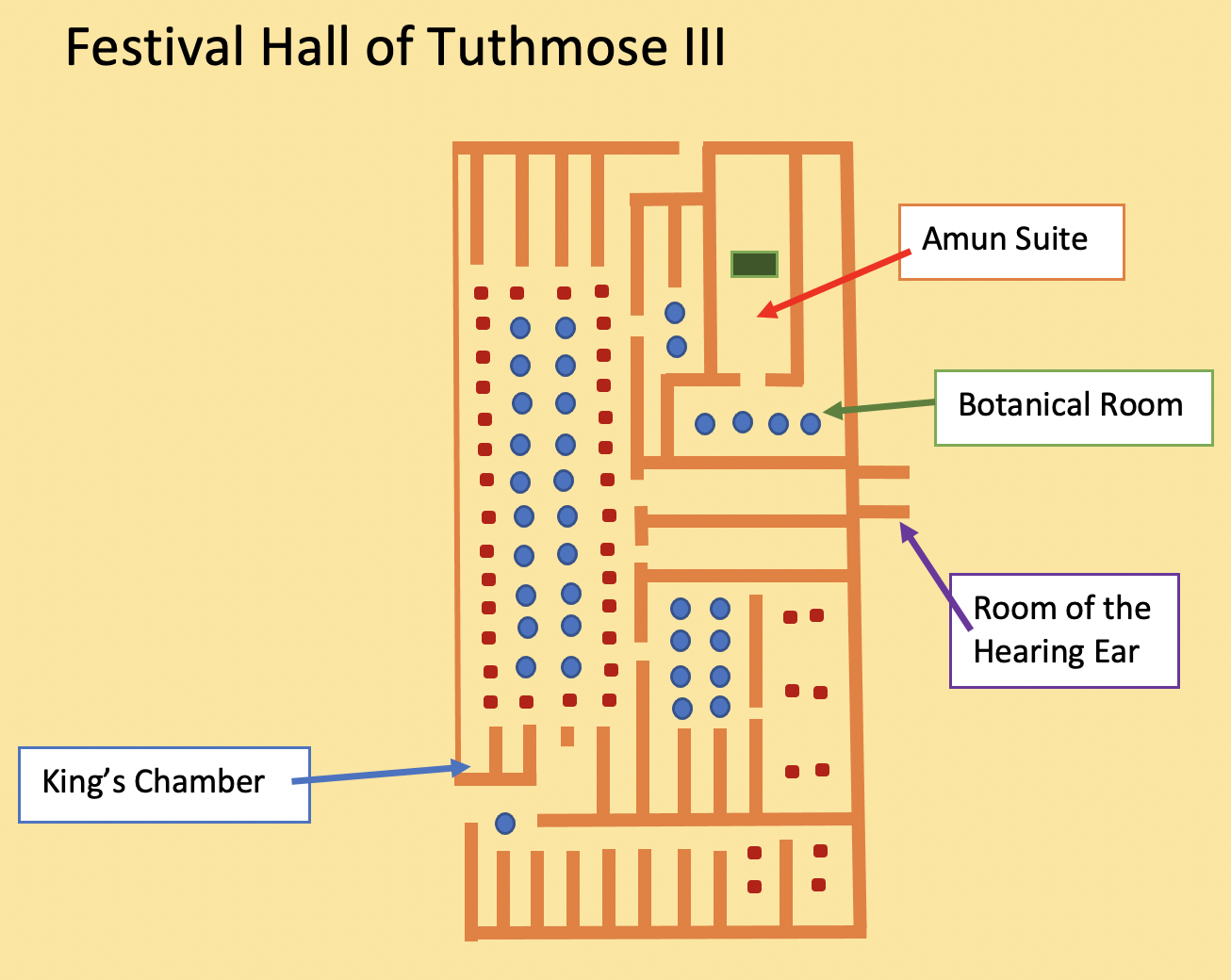 The Temple of Pharaoh Ramses II

This Temple was commissioned by Pharaoh Ramses II but is also known as the Temple of the Hearing Ear.

It was where the populace would approach the Hall and the priests who ran it as a Temple and ask for their intervention with the Deity on their behalf.

These enquiries were known as Petitions and were dealt with by the lower levels of the Priesthood.

The Temple of Khonsu

Constructed by Pharaoh Ramses III, the Temple was dedicated to the God Khonsu, the son of God Amun Ra and his deity wife, the Goddess Mut. Although Pharaoh Ramses III erected the temple it is thought that he did not live long enough to see the decorations completed. These instead were taken on by his successors.

The Temple is located at the end of an Avenue of Sphinx and was added to by Pharaoh Ptolemy III with a Gateway and Enclosure Wall. Much of the stone used in the remodelling may have been taken from damaged or deconstructed Temples, Walls and Pylons inside the Precinct of Amun Ra; this can be seen in the mismatching of the stone blocks that are used.

These include potentially stonework from the Mortuary Temples of Pharaohs Amenhotep III, Ay and Horemheb; a Granite Barque Shrine of Pharaoh Amenhotep II and various blockwork from Pharaoh’s Akhenaten, Seti II and Ramses II. 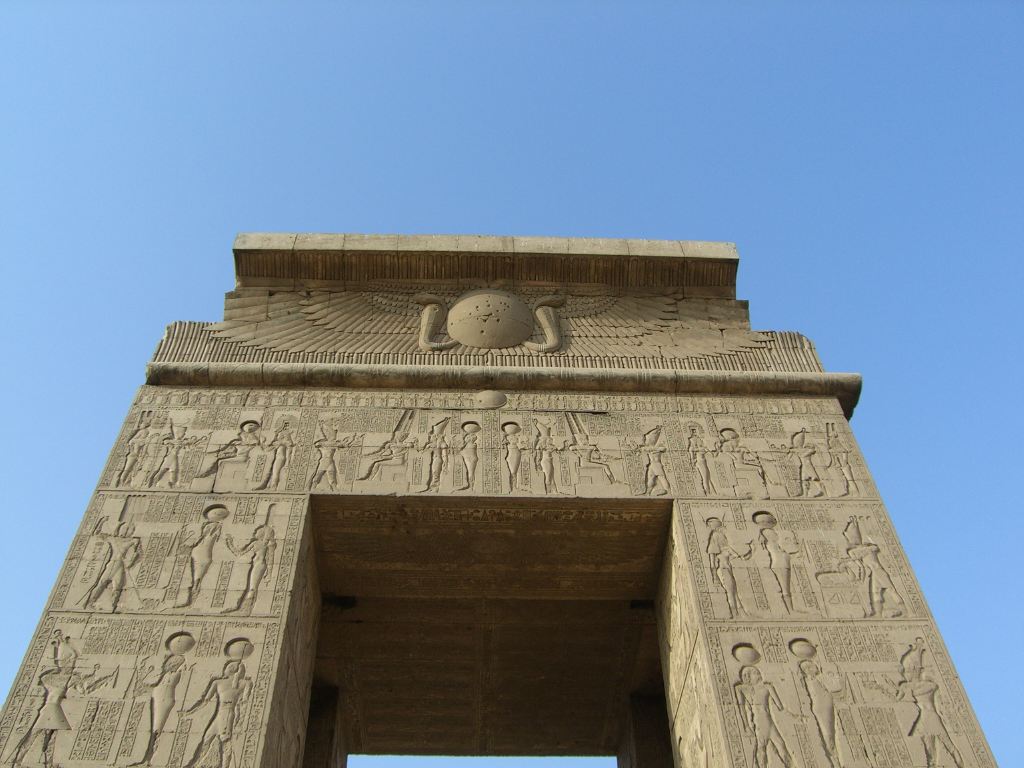 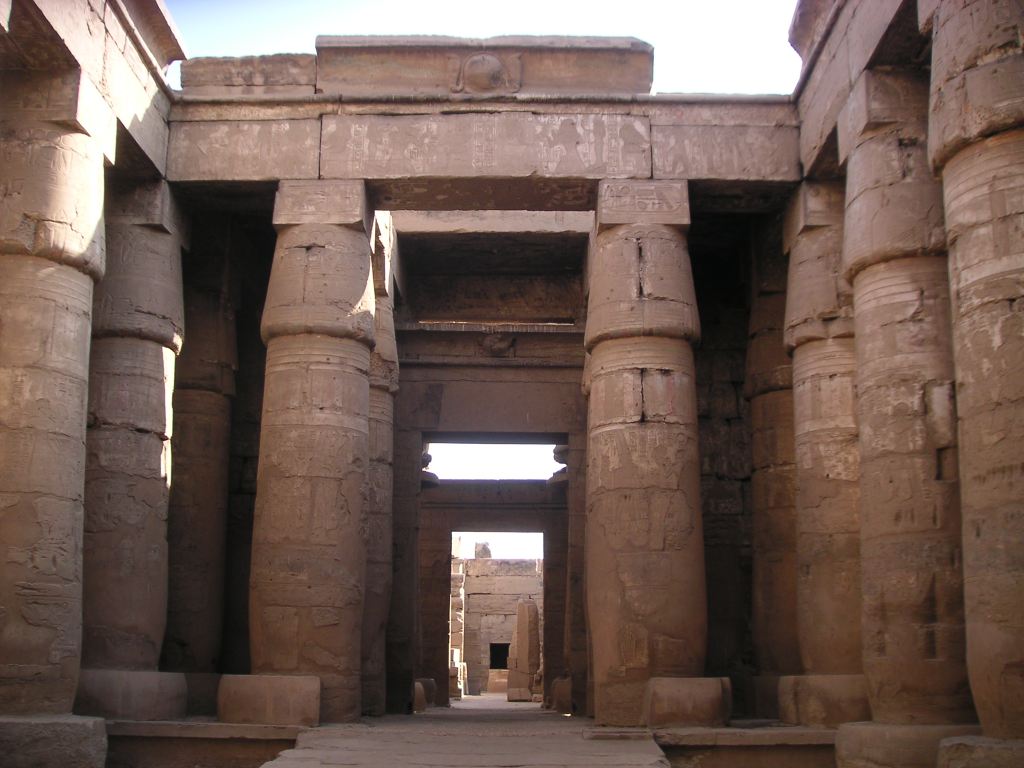 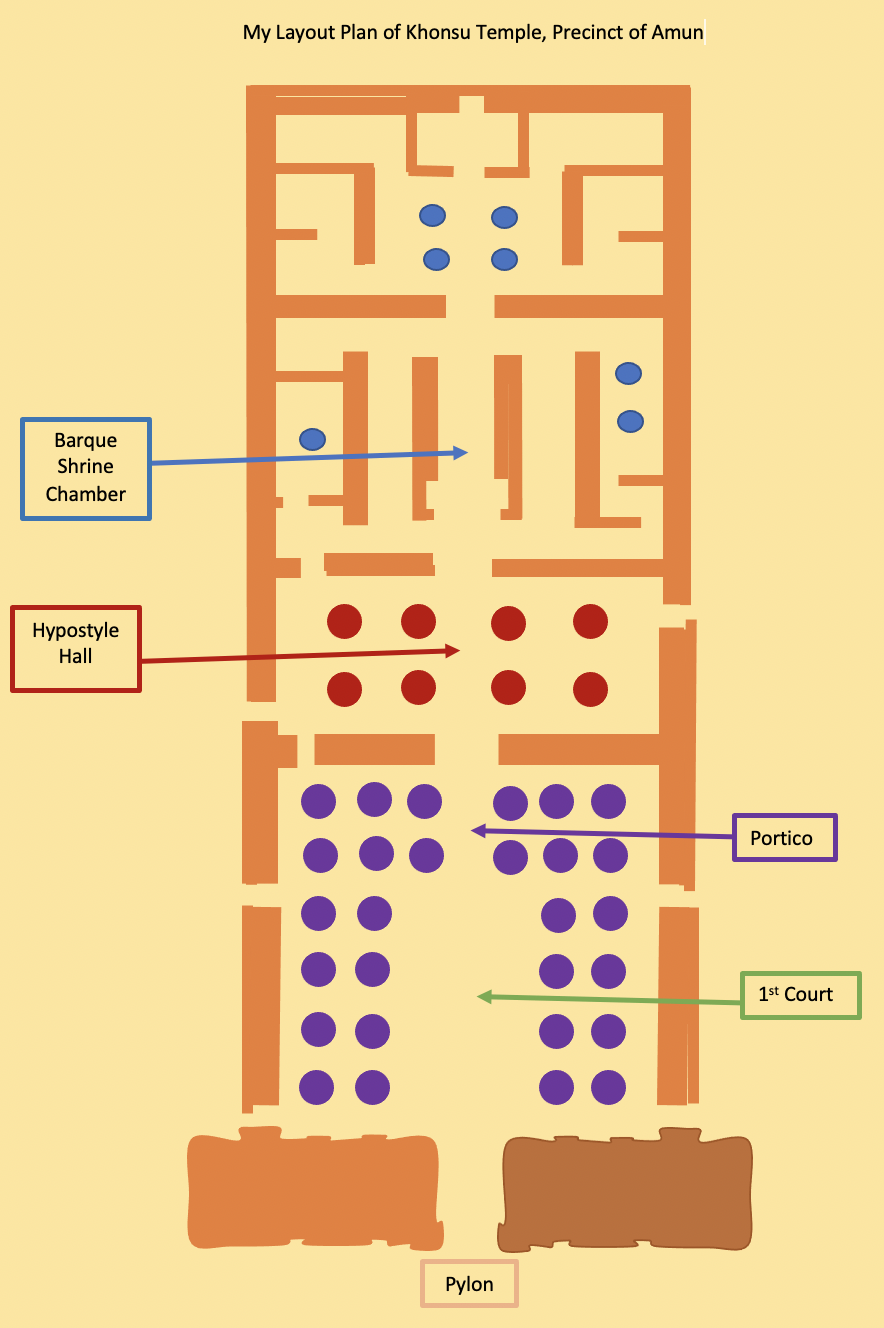 The Temple of Opet

Located alongside the Temple of Khonsu, the Temple of Opet was erected during the Ptolemaic Period, started by Pharaoh Ptolemy VIII and is one of the last large buildings placed inside the Karnak Temple’s Precinct of Amun Ra. The Goddess Opet’s animalistic form was a Hippo, and she was a locally worshipped Goddess in Thebes. The Temple consist of a Gateway – the opening in the Enclosure Wall, a Kiosk, a Pylon, 2 Courtyards and a raised Temple Building which has several Crypts.

The Temple of Osiris

“This is the mound that hides what it holds; this is the hill of Osiris”

Dedicated to the God Osiris, this Temple has no doorways that can be accessed at ground level as it original had a ramped entrance that has been lost to time.

Erected by 25th Dynasty Pharaoh Taharqa he also had blocks reused from his predecessor Pharaoh Shabaka which were the usurped by his successor, pharaoh Psamtik II.

Much of the rooms have now been infilled with Earth, mud and bricks and there is no general access. 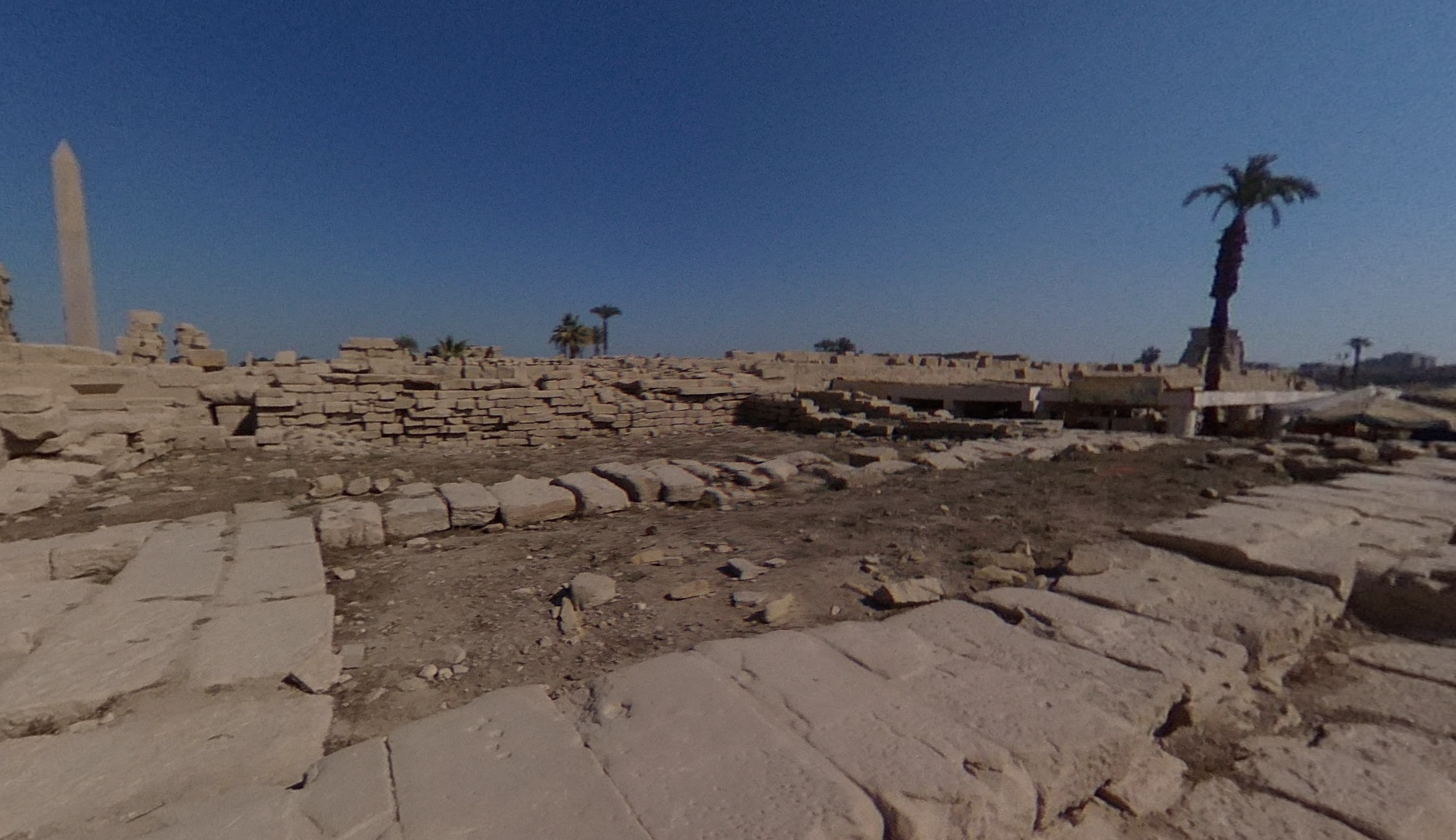