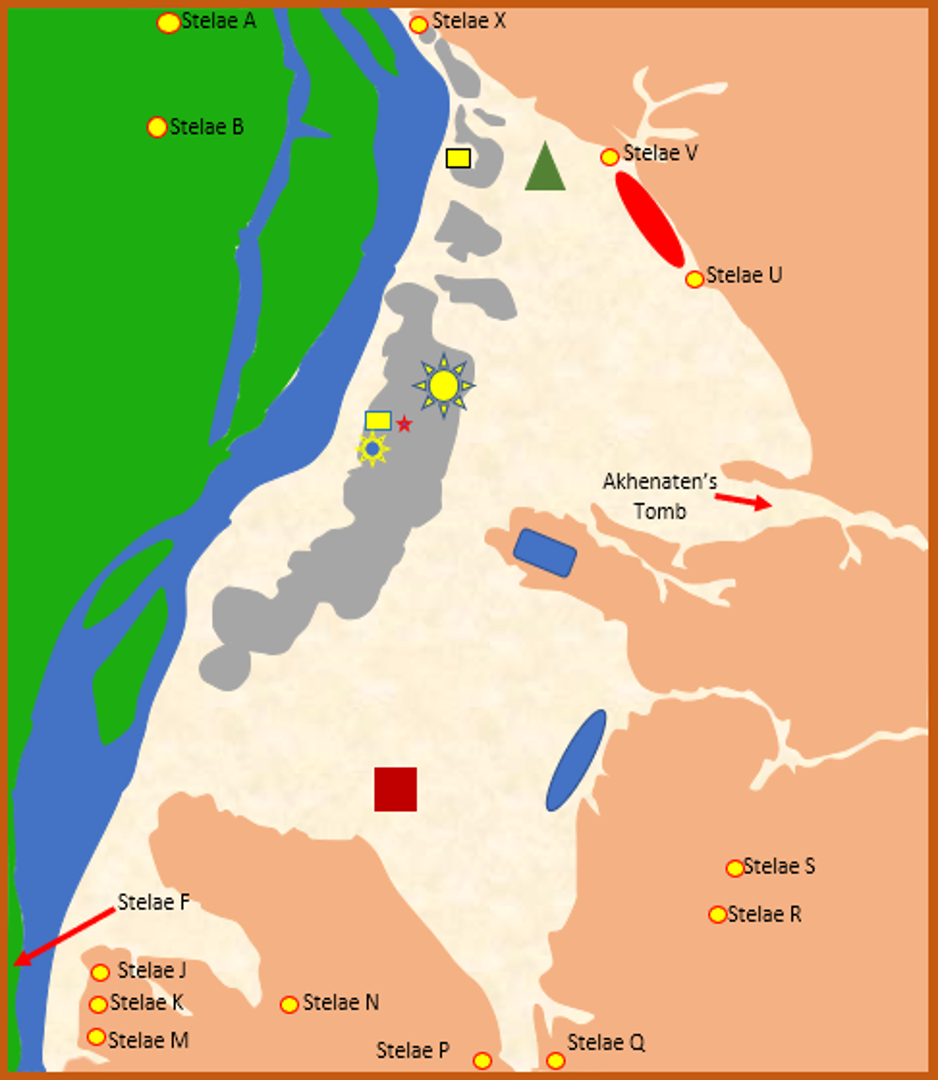 Archaeologically speaking, the Tombs are the most important parts of Akhetaten. There are 25 Tombs: 6 in the North for senior Officials & 19 in the South

Ancient Roadways are visible in front of the Tombs. There is very little decoration in these Tombs.

Tomb 7  PARENNEFER
“Royal craftsman, Washer of hands of His Majesty“

Tomb 8  TUTU
“Chamberlain, Chief servitor of Pharaoh, Overseer of Works, Overseer of Silver & Gold”. Tutu’s titles prove him to be one of the most prominent men at Pharaoh’s court. Was he the official in the Amarna Letters who foreign princes wrote to?

Tomb 14  MAY
“Fan-bearer, Royal scribe, Scribe of recruits, Steward of the house of Sehetep-Aten, Steward of the house of Waenra in Heliopolis, Overseer of Cattle of the estate of Ra in Heliopolis, Overseer of all the works of the King, General of the Two Lands“. May was a very high Official within the earlier part of Pharaoh Akhenaten’s reign but seems to have fallen from grace before Pharaoh’s death as his name was erased. His Tomb at Amarna emphasises his promotion from humble origins. 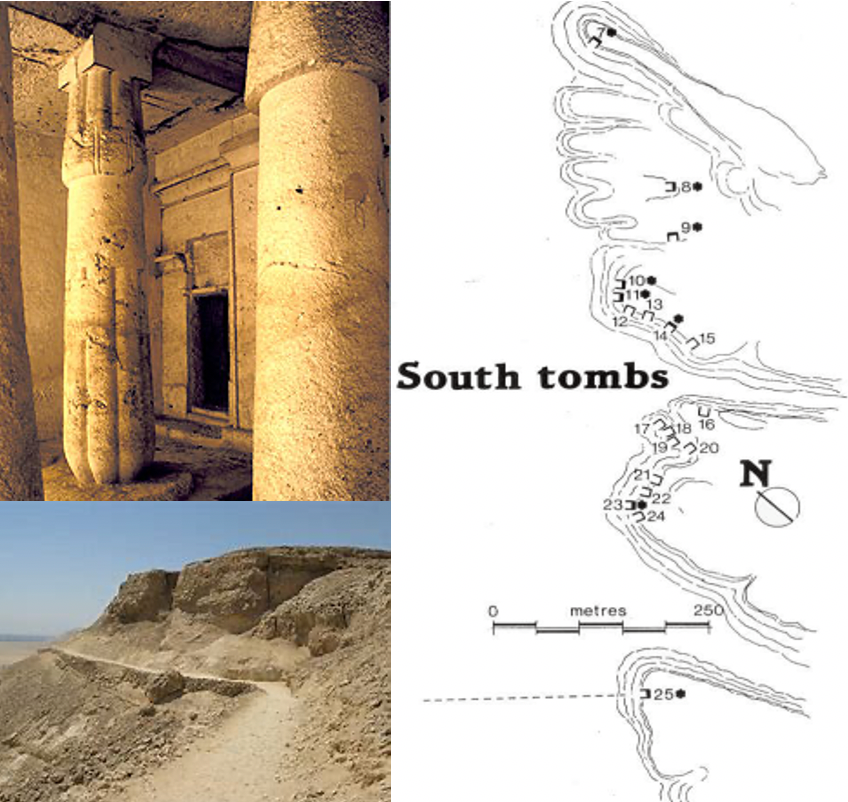 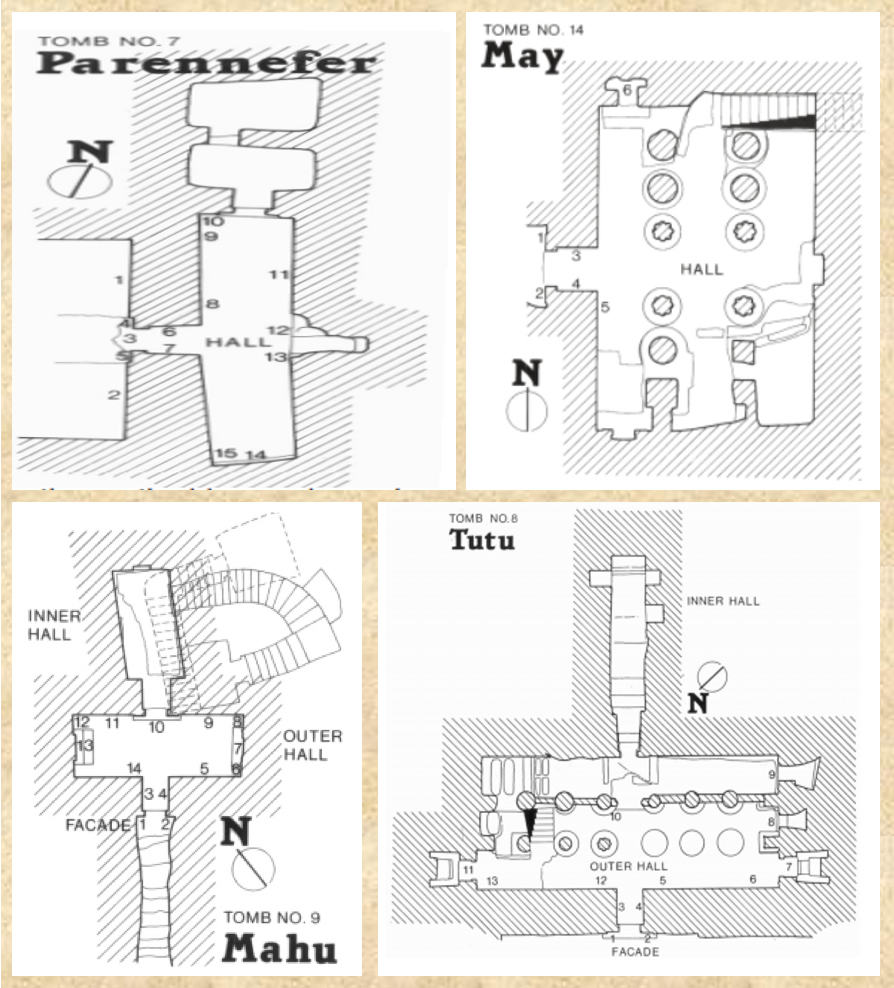 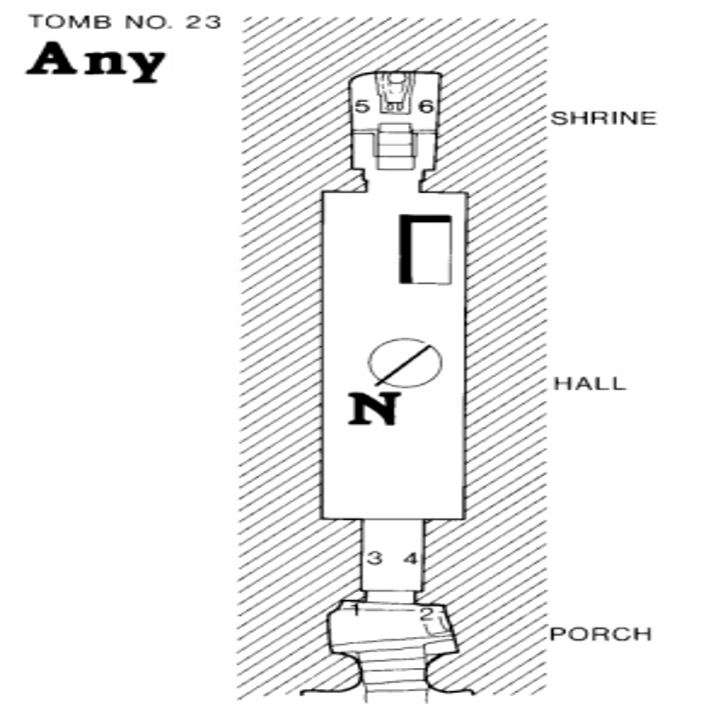 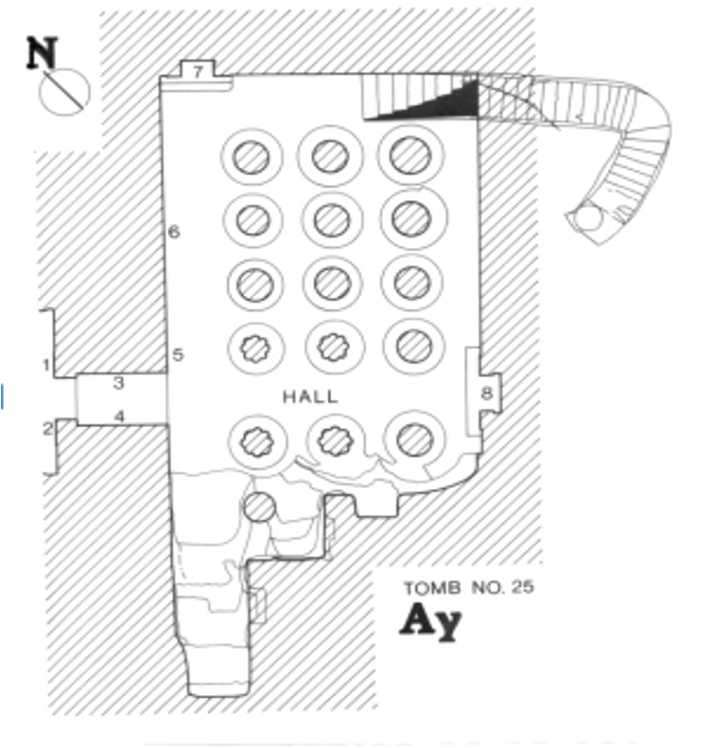 Tomb no  15  SUTI
“Standard-bearer of the guild of Akhenaten“

Tomb no 19  SUTAU
“Overseer of the Treasury “

Tomb no 23  ANY
“Royal scribe, Scribe of the offering-table of Aten, Steward of estate of Amenhotep II

Tomb no 24  PA-ATENEMHEB
“Royal scribe, Overseer of Soldiery, Steward of the Lord of the Two Lands”

Tomb no 25   AY
“God’s Father, Fan-bearer on right hand of Pharaoh, Overseer of Horses “. Probability suggests that this Ay is closely related to the Amarna Royal Family. Egyptologists have the suggestion that “God’s father” can be taken in its literal form and means that Ay was the Father-in-law of Akhenaten. So Great Royal Wife Nefertiti was Ay’s daughter.

The sticking points commences when we come to Ay’s wife’s title within the Amarna Court, Lady Tiye “Nurse of the Queen”, for if she had been the Queen’s mother, then this would have been clearly represented. This would mean that if Ay was Nefertiti’s father, then he would have to have been married twice and there is no other name of a wife associated with him, including at his Amarna Tomb which would have been the logical place to confirm Nefertiti’s mothers presence, even if she had died in childbirth.

During the times of the Coptic Christian a community settled around, and in some cases inside, these tombs. There are some stone huts below the Tombs which belonged to these Christians. They created a Church inside Tomb 6 of Head Priest Panehsy, and enlarged the Tomb by adding an apse on the north-west side.

Tomb no  1  HUYA
“Overseer of the Royal Harem and of the Treasuries, and Steward of the Great Royal Wife, Tiye“

Tomb no  3  AHMES
“True Scribe of the King, Fan-bearer on the King’s Right Hand, Steward of Akhenaten”

Tomb no  4  MERYRA
“High priest of the Aten in Akhetaten, Fanbearer on the Right Hand of the King“

Tomb no  5  PENTHU
“Royal scribe, First under the King, Chief Servitor of the Aten in Akhetaten, Chief of physicians” 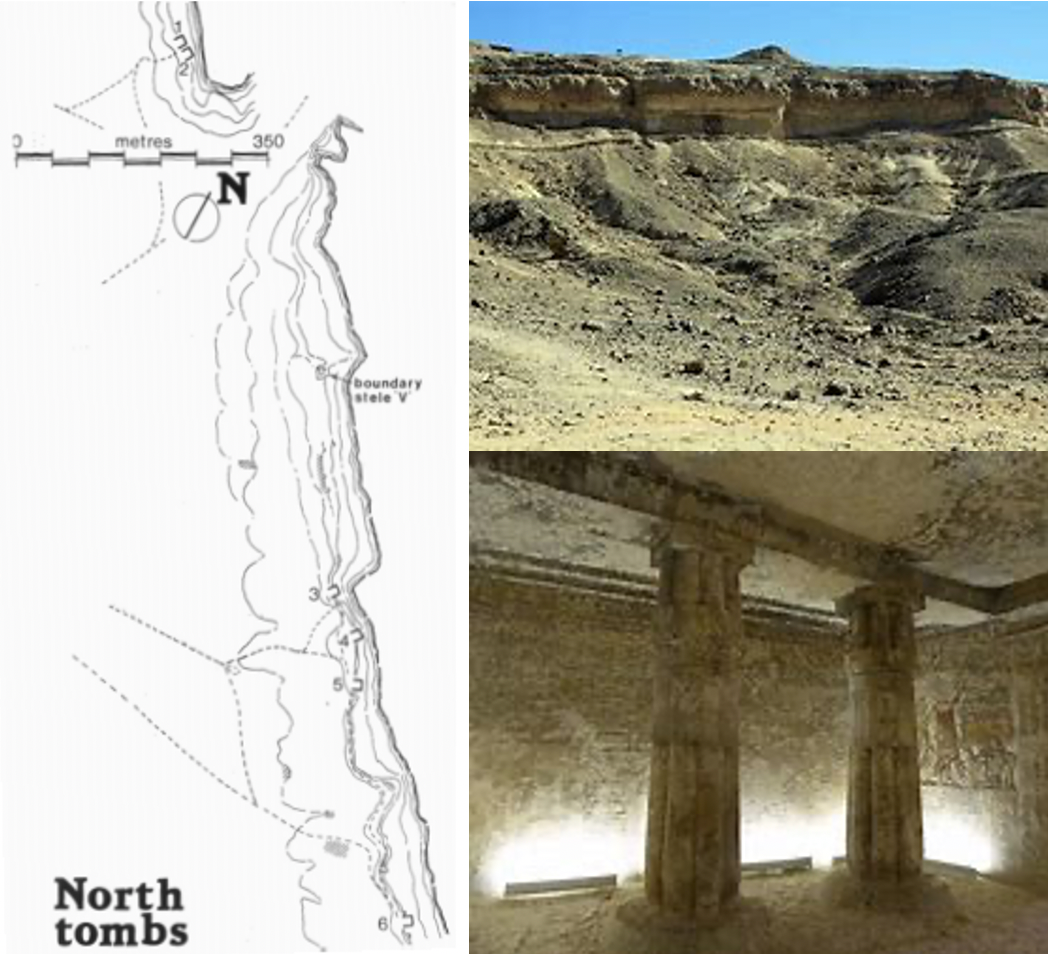 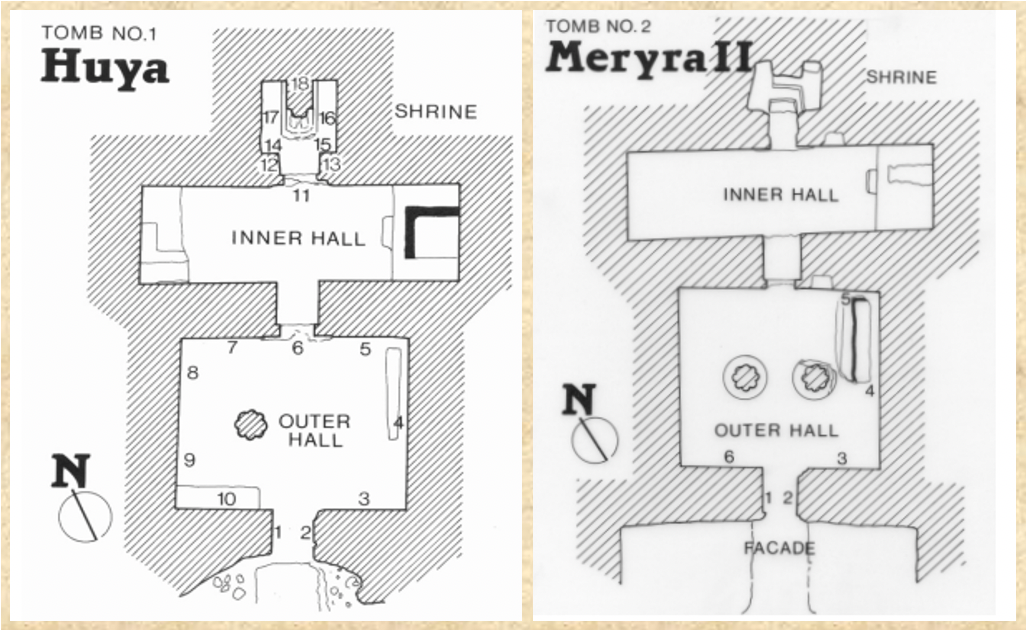 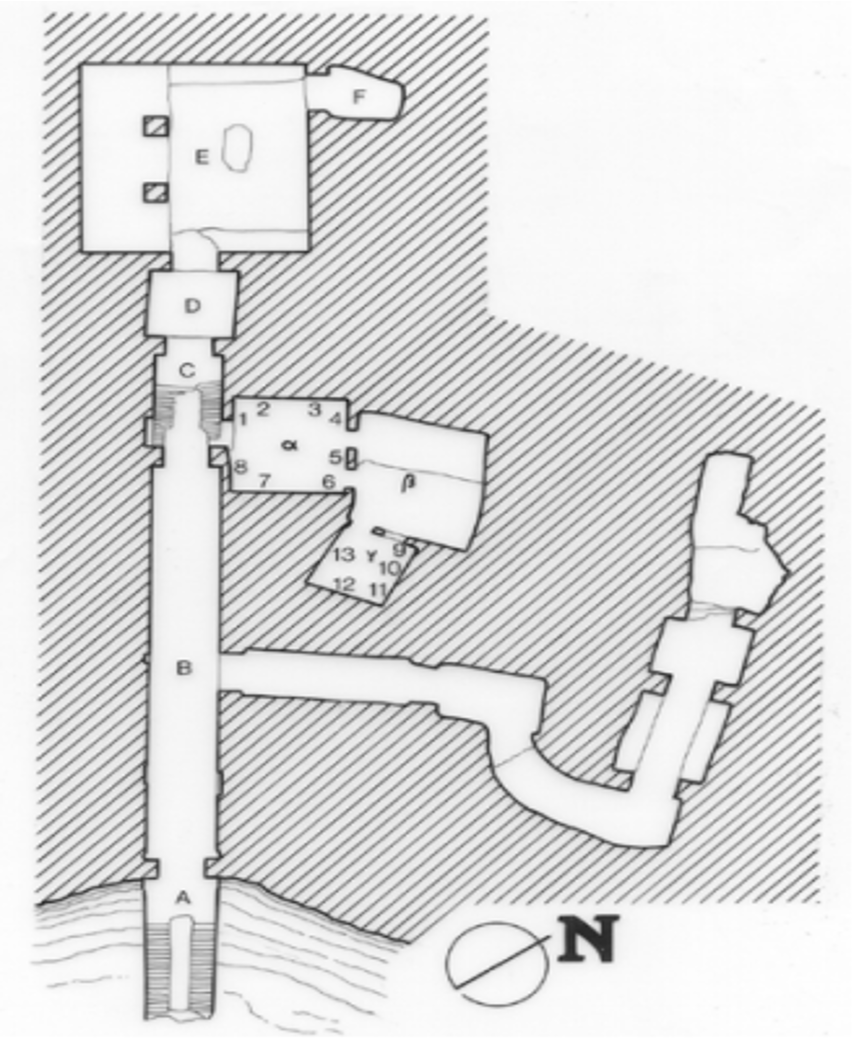 The Tombs are all located in a narrow side valley. The one Tomb that was finished was built for Pharaoh Akhenaten, Princess Meketaten and probably Queen Tiy. Regrettably the Tomb and its decoration is in a poor state as the quality of the rock which has been cut into is poor. Other Royal Tombs : On the south side of the main Royal Wadi are large unfinished tombs, again presumed to be for members of the Royal Family.

Layout using diagram points
A – Entrance to the Tomb via a Ramp
B – Long sloping Corridor
C – 2nd flight of steps
D – Shaft of 3.5 metres to deter robbing
E – Pharaoh’s burial chamber has a raised platform on the left, the remains of 2 squared pillars and a rectangular area in the center of the floor where the Sarcophagus laid

End of B Corridor : Tomb of Princess Meketaten, which has 3 Chambers

Chamber BETA is on 2 levels both of which are undecorated

Lastly, a doorway, off Corridor B, opens into a string of chambers which are all unfinished and presumed for Nefertiti or Queen Tiy.